Movies That Suck (?) The Guns of Navarone 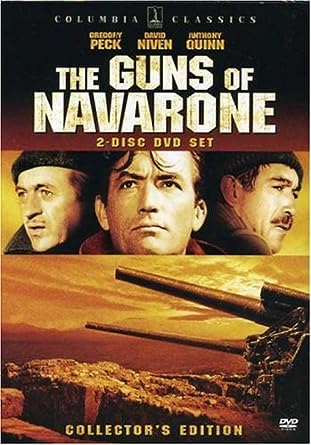 Movies That Suck is a feature where I watch a bad movie and share my reactions to it in real time. Sort of like live tweeting without the tweeting. I watch it so you don't have to! This will be spoilery  but since you probably won't want to watch these anyway it probably won't matter? But just a heads up. Oh, and occasionally these movies don't suck, in which case... yay! I still share my thoughts and feelings as I go. I hope you enjoy!

This week is the Guns of Navarone. A 1961 picture starring Gregory Peck and David Niven, among others.  I pretty much knew from the outset this one wouldn't suck, as it were, having been nominated for several Academy awards and winning for Best Special Effects. It's also based on a book by Alistair MacLean. The plot is fairly simple- a commando mission is mounted by the Allies to destroy two huge guns that the Nazis have overlooking the Aegean Sea. There are 2,000 British soldiers stranded on the island of Keros, and they cannot be evacuated as long as the guns are operational. There's also only a week to get them out, as the Nazis are planning a major blitz. The island itself is of no consequence, but the entire display of force by the Nazis is intended to impress the Turks, and convince them to join the war on Germany's side.

Okay now that we have that out of the way we can get down to it. Gregory Peck is Mallory, a renowned spy who is brought in to be on the team for various reasons- he can speak Greek and oh he's a mountain climber too. Good thing, because part of the mission involves scaling a four hundred foot high cliff. Great. His friend Major Roy Franklin (Anthony Quayle) is the leader of the team. We also have Col. Andrea Stavrou from the Greek resistance, Corporal Miller (David Niven) the explosives expert, "Butcher" Brown the resident knife fighter, and Spyros Pappadimos the local- whose father is the head of the resistance on Navarone, the island where they're going. The story is broken down by days, as they only have a week to get the mission done- and to up the pressure, they find out that six destroyers are being sent to pick up the men on Keros. If the guns on Navarone aren't neutralized by then, the destroyers will likely be toast.

We have an outstanding scene early on where the team catches a spy listening at the door, and when they confront him the outpost commander refuses to believe the spy is actually a spy. When Franklin asks for the spy to be held until after the mission, and the commander refuses, Franklin tells his men to kill the spy, and the commander too if he gets in the way. So I guess we know that the affable looking Franklin doesn't mess around! Okay now we have a look at the fishing boat they're gonna use to cross the Aegean- eek! Not exactly reassuring, and the engine constantly backfires, but hey you don't want to attract attention, right? Well attract attention they do when a Nazi patrol boat shows up.

Well okay then. Guess that's sorted. Storms prove to be a bigger problem though as we get a (rather long) shipwreck scene, where they're deposited unceremoniously on Navarone. We also get a bit of a subplot development, with Mallory confiding to Franklin that Stavrou plans to kill him at wars' end. Turns out Stavrou blames Mallory for the death of his family by Germans. Next comes the suitably harrowing climbing scene, where Mallory leads the way up the sheer cliff. In the rain. Once atop the cliff they have to move fast, as the Germans are alerted- oh, and Franklin broke his leg on the way up, so now they have an injured compatriot. To make matters worse, the Germans are on to them now. Franklin tries to commit suicide to prevent being a drag on the mission, and Mallory lies to him, telling him the Allies have switched plans, to prevent him trying again.

They split up and rendezvous in some ruins near a village called St. Alexis, but not before Stavrou, who is quite the marksman, takes out a few Nazis. Beautiful location, by the way, with the Greek columns. There they make the acquaintance of Maria, who is Pappadimos' sister, and Anna- both members of the Greek resistance. Their next stop is Mandrakos, a village inland, but things don't go well. They get Franklin to a doctor only to be captured by Nazis. Seriously the Nazis are all over town and hounding them like no one's business- they need to get out of there!

At this juncture they're all captured- why exactly did they go to hear Greek folk music? Well there we are. After a sadistic SS officer is about to torture them, Stavrou manages to distract them long enough for the captives to turn the tables. They're free! And David Niven is hilarious as Miller- he's the comic relief here and the best part of the movie. Maria has apparently taken a liking to Stavrou, and tells him so. The look Mallory exchanges with Stavrou, who is visibly uncomfortable, is priceless. There's another great scene when Mallory tells them all his new plan. Having anticipated that the Nazis may give Franklin a truth serum- having left Franklin behind so that, as an officer, he gets medical care- he is counting on Franklin giving up the fake plan he told him, that the Allies are going to mount a coastal assault. Assuming the Nazis fall for it, he and Miller will sneak into Navarone to sabotage the guns, while Brown, Stavrou and Pappadimos cause diversions.

Miller blows a gasket at the way Mallory is using Franklin, and he's got a good point. Miller tells him he's using up a good person, and that Franklin will never be the same, even if they survive, and Mallory replies that he doesn't know a better way- and what about the 2,000 men on Keros? Miller says he doesn't know the soldiers on Keros, but he knows Franklin. And he laments the senselessness of war, and how there's always another one and it never ends. He's not wrong.

That night Anna comes to Mallory while he's standing watch, and they share a quiet moment. The next day we see that Franklin is indeed being tortured, but the commander insists that the truth drug be used rather than physical methods, and meanwhile the Nazis are burning Mandrakos to punish the villagers for the commandos running free. The Nazis fall for the misinformation and begin to deploy for a coastal assault that's not coming, but meanwhile Miller discovers his explosives have been sabotaged. Someone in the group is a traitor! But who?

Well it's Anna actually. She was turned by the Nazis and has been their agent all along. And we have another moral quandary, as Miller tells Mallory that she must be executed, after all, if the mission is not to be compromised. David Niven and Gregory Peck are excellent in this as they square off yet again, debating responsibility in wartime. Miller doesn't really want Anna shot, of course, and when it looks like Mallory will do it he rushes to stop him- but both he and Mallory are shocked when Maria shoots her instead. I imagine the Greek resistance wouldn't appreciate having been snookered by Anna.

Such a powerful moment though. It's scenes like these that make this movie, not the wartime stuff. Anyway Stavrou and company begin causing havoc in the village while Mallory and Miller infiltrate the fortress. Unfortunately, they set off an alarm! Because of course they do. So they have to haul ass down a lift to where the guns are, and we get our first close up look at the big guns. Cue the dramatic music. And they take their time looking around too. Move, people! Maria and Brown steal a boat for them all to escape in, but Brown is killed by a Nazi he just stabbed. That scene is weird, actually, because Brown hesitates yet again (he did earlier in the movie as well- for an accomplished knife fighter he picked a heck of a time to have second thoughts), but I actually liked his character, and the fact that they gave him humanity by having him question his killing. Too bad it results in his death. And Pappadimos dies too in a weird shoot-out with a Nazi commander- why would they shoot at each other in the open, with no cover? You'd think this was a Clint Eastwood movie.

Miller meanwhile is setting his explosives, and here come the destroyers! They better scoot. Miller has a back-up plan, though, that involves also booby-trapping the hoist, since he figures first place they look will be the guns. Then they have to book outta there. Niven cracks me up as Miller- when it's time to jump into the sea he has this hilarious look on his face, and he just sort of lets go resignedly (he can't, as it turns out, swim). Luckily Maria shows up with the boat. So they get Stavrou and head for pick up- but Stavrou isn't coming back, he elects to stay on Navarone with Maria. The Nazis meanwhile find the explosives on the guns, and also a dead mouse that Miller left behind with a little firework in it- really, he made this movie- so they figure they're all clear.

Well, they're not. After a few misses the hoist explosives finally go off, and it's game over for the guns. We're talking massive explosions and pretty much the whole mountain is toast. Success! And the ships are free to rescue the men on Keros. Again, Stavrou stays behind with Maria, to help her on Navarone, and Mallory has a nice moment with Miller at the end as they watch the flames atop the mountain. Oh and Stravrou buries the hatchet with Mallory as well, which is nice. A good ending to a good movie, although I would have liked a little more with Mallory and Miller. Kind of an understated final moment, but all in all... a great movie.
Posted by Greg at 12:00 AM