Written by Jimmy Palmiotti and illustrated by Amanda Conner.

So Kamandi is in deep shit- he's been teleported to San Diego and is falling to his death after the events of last issue. But wait... there's more! Some creatures called ravers fly up to rescue him, and for some reason his dialogue as this is happening cracked me up.

"Giant bats! With helmets! This can't be good!"

I would say not. Kamandi's kinda dumb though? Instead of letting himself be rescued, he tries to fight them off? Um, dude, the alternative is going splat. Fight 'em later, sheesh. Serves him right when his head bounces off a rock on the way down? So he wakes up a captive and meets Vila, who is, um, green and comes out of a vat. And she's apparently... his. Yeah I'm confused too. His captor is Captain Fritz of the God Watchers, a group that apparently has been awaiting his coming? Or something. I just go with it. Oh, and Fritz is a super- evolved turtle.

Kamandi notices the ravers are being treated poorly, and they tell him they're slaves and that he should leave, as Fritz' crew are capable of bad things. At dinner Kamandi is told that they see him as a messenger of their god, and that his coming was foretold- they even have a picture of him, with two adults that are apparently his parents? Although the picture is cropped so he can't see the adults' faces. Did his parents have something to do with genetically altering these animals?

And then... the animals start eating their green companions. This is bizarre. Kamandi of course declines to, um, eat Vila, and the God Watchers notice that something is off with him. Later they tell him that a distant point of land he's looking at is the island of a Jaguar Sun Cult- ooh is he going there?- but then they are attacked by a bunch of bat-people! Vila is of course grabbed, and Kamandi can't free her so he rips her arm off? After all, it will grow back, right? Earlier, at dinner Vila told him that their limbs grow back when the God Watchers were, uh, eating them.

Yes this is batshit crazy. He says sorry though. And he may have used his teeth to help get rid of her arm. This resulting dialogue kills me.

Kamandi frees the raver slaves after they tell him that they will be killed as well, since any ravers captured are considered tainted. How will they escape though? Well, the attacking bat-people are gonna help with that, as Capt. Fritz is conveniently beheaded and the rest scattered. Who knew this would be so fun? So the captive ravers fly Kamandi and Vila to safety as the bat- raiders drop gasoline bombs on the whole place. And then we have an awesome shot of them flying off this immense ship they were on, with flames licking in the background. Killer art this issue. As they debate where to go, it appears their only option is the sun cult island. Uh-huh.

"We can't go back home, so we are going to have to take our chances on the sun cult island."
"Is it safe?"
"Safe? How long have you been on this planet, Kamandi?"

So no sooner do they land there than they are captured by jaguar people. Because yeah. After waking up (he was knocked out) he is shocked to find that his raver friends were cooked- yes they are dead- and frankly this comic is a trip. I was not expecting that! King Ekeko of the jaguar cult tells him to shut up and has him prepared for some sort of sacrifice. Sure enough, wild drumming ensues, and when it stops...

Um, ya think? So what could go wrong after all that? Well, an immense jaguar god (or something) shows up. See ya next issue! 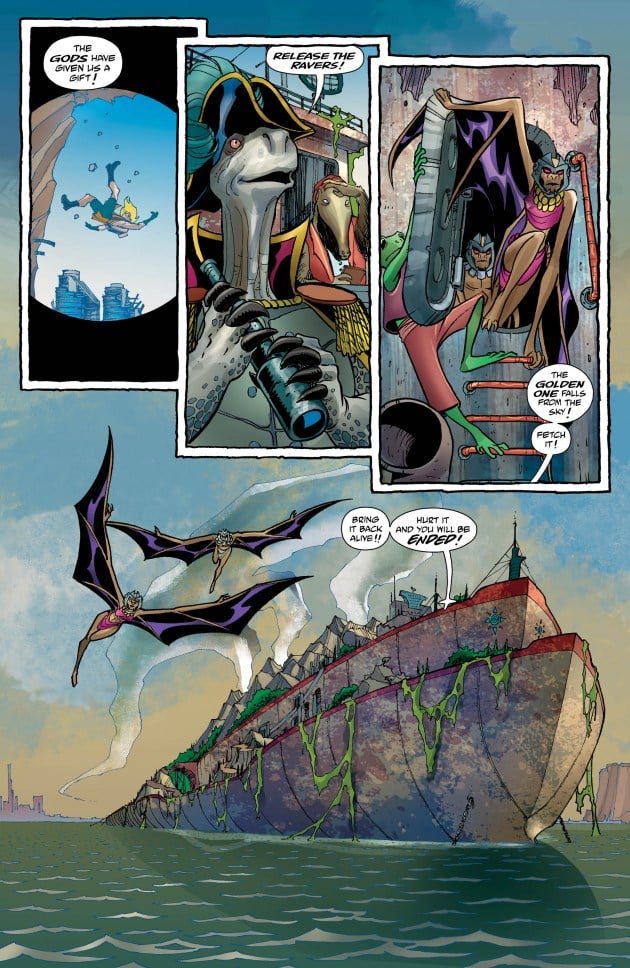 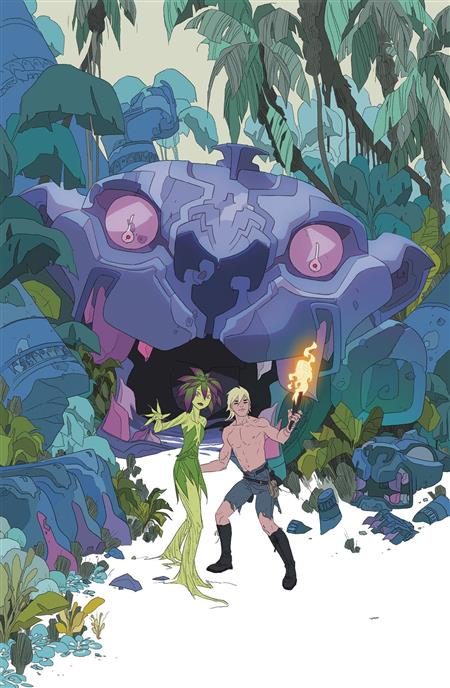