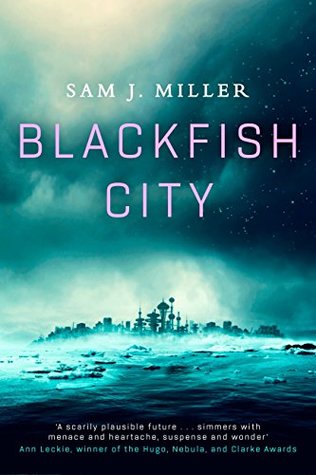 Blackfish City is a hard book for me to review. I came into this with reasonable expectations but high hopes- I mean, you have a post apocalyptic world, rising sea levels, a city run by artificial intelligence, and an orcamancer. Yes, an orcamancer- someone bonded to a killer whale. Oh, and she has a polar bear too, as if the orca wasn't enough! I mean, what's not to like? And while there are some neat ideas here, and good writing, this book was a slow read for me. I'm not even sure why- I mean, I like dystopias- but there's just something about this that didn't work for me.

The central premise here is that the orcamancer arrives at Qaanaaq, a floating city in the far northern hemisphere, and her arrival sends shockwaves through the city. Mainly because of the novelty of her appearance- again, she has an orca and a bear- but even as everyone wants to know why she's there, we also get insights into Qaanaaq itself. And it's a fascinating place, with spiral arms radiating from a central hub, and aquadrones that protect the central core, greenish methane flares that light up the night (I especially liked those- imagine watching the greenish flares shoot into the sky against a backdrop of stars, or the northern lights). The worldbuilding and sense of imagination are there. But it's almost too much? I felt at times like, okay, this world is a mess, I got it, but I need something to happen.

Part of the problem may be the multiple points of view. We have Ankit, a political worker just trying to make it in the city; Kaev, a beam-fighter who throws fights to lesser contenders because that's his role; Fill, a gay man who gets in way over his head when he gets sucked into events in the city; and Soq- perhaps the most interesting of the bunch- a messenger of indeterminate gender who has plans for Qaanaaq- and they're not beneficial plans. Mixed in with these four POV's are themes of gender, climate change, the evils of real estate, rich/ poor divides, refugee issues- there's a lot going on here. The author has a lot to say about a lot of topics, and while some may feel it really brings this world to life, for me it was an awful lot for one story. Especially a story that takes a long time to go anywhere.

Qaanaaq is fascinating, like I said, not quite like any post apocalyptic setting I've read about, but at the same time there was so much going on that I never really felt like it was alive. The four point of view characters eventually come together, brought into contact with each other through events, and of course the orcamancer question looms over all. When it all does come together the story moves at a pretty good clip, and the climactic action scene was relatively interesting, but if you're looking for action or a fast moving story, I'm not sure this is it.

I have a hard time recommending this because I think for some readers it will absolutely work, and for others it might drag, like it did in my experience. I think the gender explorations were particularly well done, so that may be a bright spot- I had to laugh at one point when one of the characters sees a guy he thinks is hot, then thinks it's a girl, then has no idea what it is. Gender fluidity and the experience people have with that are a focus here. There's also a strong sense of frustration with the evils of capitalism and the way landlords perpetuate suffering among the poor- I mean, depending on your political views you may cheer or roll your eyes. I for one found myself agreeing with much I read, even though I wanted a little more escapism and a little less real world relevance, perhaps.

I'll leave you with this quote, which perhaps sums up much of the novel in terms of tone.

"They banned political parties, which had- in the view of the artificial intelligences that drafted these rules, anyway- been vehicles of mob rule and mediocrity more often than efficient strategies for decision making."
Posted by Greg at 5:27 PM