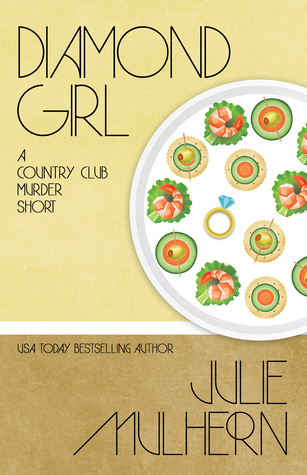 Diamond Girl by Julie Mulhern is a short in the Country Club Murders mystery series. It's a quick mystery with Ellison's housekeeper Aggie in the starring role, as she has to solve jewelry thefts that her new boyfriend is suspected of. Aggie will of course be familiar to anyone who reads the Country Club Murders, but even if you haven't this is a great introduction to the series. You get a different perspective on Ellison, the protagonist of the series, and that alone makes this a fun read! It never occurred to me to look at Ellison through Aggie's eyes.

It's nice to see Aggie get the spotlight as well. She lost her husband to cancer and hasn't fully recovered, so when she meets Mac it takes her a while to let go and learn to live again. The story is short but heartwarming, and just makes me that much more anxious for the next Country Club book. Oh, and I expect that Mac will be showing up in the books as well, and his catering is enough to make a reader hungry!

Orbiter 9 is a movie on Netflix about a woman named Mie who is on a solo mission to a new planet, but finds out her mission is not entirely as she thought it was. Her parents died to give her enough oxygen to survive the trip, and she meets a rendezvous point where an engineer can come aboard and make repairs. The engineer, Alex, is the first human she's seen in her life, and she falls for him (rather quickly), but he knows things about the mission she doesn't. When he tells her certain things it changes both of their lives in unforeseen ways.

I liked this a lot. It was just an impulse watch but I highly recommend - it's a Spanish production so I watched in subtitles, but it's well done and kept me hooked. I had to know what would happen to Mie! Her and Alex were great and I felt for them as they had to navigate a minefield of obstacles. This is a great science fiction film!

The Chalet is a six part French series appearing on Netflix. I devoured this one in record time due to the awesome nature of the premise- a bunch of friends who grew up together and their significant others come together at a village in the French Alps for a wedding. Unfortunately there are dangerous secrets in the background and after all access to the village is cut off, murders happen. It's kind of slow to get going but once it does I couldn't stop watching. And it has what may be the creepiest title sequence ever? Judge for yourself.