Star Wars: From A Certain Point of View 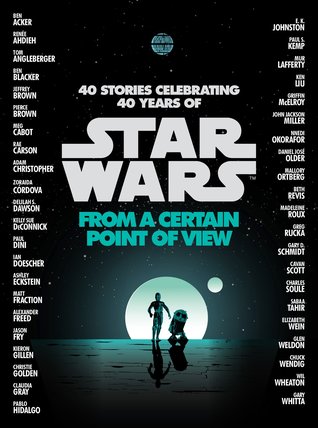 Star Wars From A Certain Point of View is an anthology of short stories set around the time of the original Star Wars movie, or episode IV A New Hope as I guess it's referred to now. Like most anthologies it's hit or miss- there are some good stories and some not so good ones. I was really curious to see what this would be like, given the vast and eclectic author mix. I'm not going to say much about the book as a whole, but will instead rate each story below. A few introductory words though.

As mentioned above these all take place during the original movie. They're in chronological order too, starting at the beginning when Leia's ship is captured and ending with the victory over the Death Star . Each story is about the bit players, the side characters, although there are some big names who show up. The cast list  ranges from the captain of Leia's ship to Grand Moff Tarkin, and even to the trash compactor monster from the movie. Yes, really. Do they all work? No, but some do, and there's a few gems here as well.

I wouldn't say this is essential reading, and it provides no clues really as to the upcoming episode VIII The Last Jedi- this is firmly set in episode IV time. It's too bad we couldn't get stories from the other original movies as well- maybe we will, down the road? I would give this three stars overall. And as someone who loathes the prequels, I was not enamored of characters or situations from those movies popping up, but that's just my personal preference. So, let's take an individual look.

Raymus - 2.5 stars. Not bad, just nothing special. Told from the POV of the captain of the Tantive IV.

The Bucket - 3.5 stars. Told from the POV of the stormtrooper who stunned Leia on the Tantive.

The Sith of Datawork - 3 stars. A humorous look at Imperial bureaucracy. I laughed at the part about how Vader can skip paperwork.

Stories in the Sand - 3 stars. A Jawa on a sandcrawler.who runs into a certain droid.

Reirin - 2 stars. Not my thing. A Tusken Raider story.

The Red One - 3 stars. Kind of touching, although a huge eye- rolling moment (or at least there was for me). A certain droid...

Master and Apprentice - 3.5 stars. A Qui-Gon/ Obi-Wan story on Tatooine. I gave it 3.5 because Claudia Gray wrote it and I like her writing, but i didn't really enjoy it that much as I'm not a Qui- Gon fan.

Beru Whitesun Lars - 2 stars. Very short, a look at Aunt Beru. Mentions blue milk too much, once or twice would have been fine, but it's overdone.

The Luckless Rodian - 3 stars. A recounting of the cantina scene from Greedo's perspective.

Not For Nothing - 4 stars. A fun story by Mur Lafferty, one of my favorites of the collection. A story about the Modal Nodes, the band playing in the cantina. Humorous, including an anecdote about Greedo bringing in fugitives to Jabba and then helping them escape so he can bring them in again.

We Don't Serve Their Kind Here - 3 stars. Wuher the barkeep's story. Nothing amazing.

The Kloo Horn Cantina Caper - 3 stars. More cantina fun, with several patrons all mixed up in each other's (illegal) business. Just okay, a bit confusing especially if you don't know who all these aliens are, but it gets better towards the conclusion.

Born in the Storm - 2.5 stars. A stormtrooper in Mos Eisley has a run-in with the Force? Could have been good.

Fully Operational - 3.5 stars. One of the better stories.

Change of Heart - 4 stars. A stormtrooper witnessing Leia's interrogation. One of the best stories.

Far Too Remote - a one page cartoon image. Not even a story.

The Trigger - 3 stars. An archaeologist/ weapons dealer on Dantooine.

Of MSE-6 and Men - 3 stars. The mouse droid that fled from Chewbacca on the Death Star. Find out what happened to TK-421 from the movie! I liked that it was told from the droid's perspective, but it was kind of bizarre. I did like the mention of the Death Star lighting!

Bump - 2 stars. The stormtrooper who let the droids go in Mos Eisley may have a second chance? I thought it was kinda lame.

End of Watch - 3 stars. A pretty good story of a shift commander finishing up her watch while Han breaks into the detention area.

The Baptist - 3 stars. Not sure why we needed the trash compactor monster's story, but there it is. Kinda touching but kinda silly.

There Is Another - 3 stars. A tale of Yoda on Dagobah.

Palpatine - 2 stars. A poem by the Emperor, of all things. Next.

Sparks - 3 stars. A nice story about one of the pilots on the Death Star run.

Duty Roster - 4 stars. The trench run/ Death Star from the perspective of those on Yavin 4.

Grounded - 4 stars. The Death Star battle again, this time from the POV of the flight crews.

By Whatever Sun - 3 stars. An attendee's view of the award ceremony after the Battle of Yavin

Whills - 2 stars. A sort of humorous discussion between someone writing the opening crawl of the movie and someone critiquing all his choices. And it just kind of ends- pointless.
Posted by Greg at 12:00 AM