Well it's February now. Another week and we seem to have survived. The good news is February is a short month and then March... spring is on the way. And about time.

I didn't read as many books as last week but it was still decent.  The 100 is back and I reviewed the first episode here. I also watched the first episode of Riverdale- anyone watching? I would say... it's got potential. And I watched a bit of Futurama - I've never seen the show and it's on Netflix. It's okay. The only other thing of note is I won the Best of 2016 giveaway over at A Night's Dream of Books. Crooked Kingdom is the book I picked. Thanks Maria!

Last week I reviewed Three Dark Crowns and this week I'll review How Will I Know You? I also put the finishing touches (well, mostly) on two more installments of Trust Issues. Yes Kayla and Nick are in trouble again!


Cover Characteristics was about humorous covers and Top Ten Tuesday was all about my favorite graphic novels. I also posted Tuesday Tagline and I reviewed Three Dark Crowns. And I posted Bookcover Spotlight #86.

Cover Characteristics will look at Statue of Liberty covers and Tuesday Tagline and Top Ten Tuesday will be back as well.  I'll also be reviewing How Will I Know You and of course Friday will be a Bookcover Spotlight. 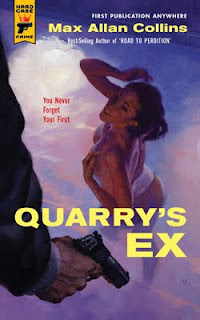 What would Rogue One look like as a 8-bit game?