So this one started off with a bang. After last weeks cliffhanger- Cheryl being arrested for Jason's death- it turns out she wasn't really arrested but we get a better sense of what's happening. Cheryl tells the police chief that she didn't kill Jason, she helped him stage his death so he could run away. Why would Jason want to run away? And what happened to him if he died on July 11th- a week after his disappearance. Well that remains to be seen.

I was kind of intrigued when I saw the title of this one- Body Double. The heart of this episode is the deepening friendship between Betty and Veronica, and we also get a glimpse of how dark Betty is willing to go. Definitely foreshadowing for down the road. This still remains just a little over the top- I mean Alice Cooper and her snark are just a bit much- but it works here as there is that feeling that underneath the surface there is something really dark at the heart of Riverdale.

So what brings Betty and Veronica closer? Well Veronica has a date with Chuck who happens to be a player- and when her date with him gets exaggerated, we'll say, she's humiliated. So we're talking slut- shaming (even though she just made out with him) and guess what? The boys on the football team have themselves a little competition and a little book where they keep score. And Veronica is not happy.

After some other girls come forward (including Ethel, who happens to be Shannon Purser from Stranger Things) they decide to set the record straight. After breaking into school late at night to find the book they're met by Cheryl, who at first is skeptical (after all her brother Jason was on the team- surely he wouldn't countenance such behavior?) but when they find his name in the book next to Polly- well Cheryl realizes maybe there are some things about her brother she didn't know. And she's all in. Oh and she rocks the thigh high boots too.

Speaking of Cheryl, I love her line when they ask her how she knew where they were.

Cheryl has all the best lines in this one. And here's where we see Betty go dark. Her and Veronica play a little game with Chuck and even Veronica is taken aback how far Betty is willing to go- again some pretty heavy foreshadowing for down the line? And perhaps a glimpse into what Polly was like- we haven't seen her. And Alice is her mom.

"You want to go full dark, no stars, Veronica?"

Some other stuff happens too- we get forward momentum on Archie's music, the Pussycats do a little playing, and Jughead investigates the murder after joining Betty on the school paper.

Let's talk about Alice a minute. Not only does she leak the autopsy results on Jason, she's still a bitch to Betty and she causes all kinds of trouble at the Riverdale gala. There's obviously no love lost between her and Penelope Blossom- I didn't see it coming when Penelope clocked her- but that didn't even slow her down as she then went after Hermione Lodge about Veronica. Man she's a one- woman wrecking crew. As I said above she's almost too over the top, but it works so far. 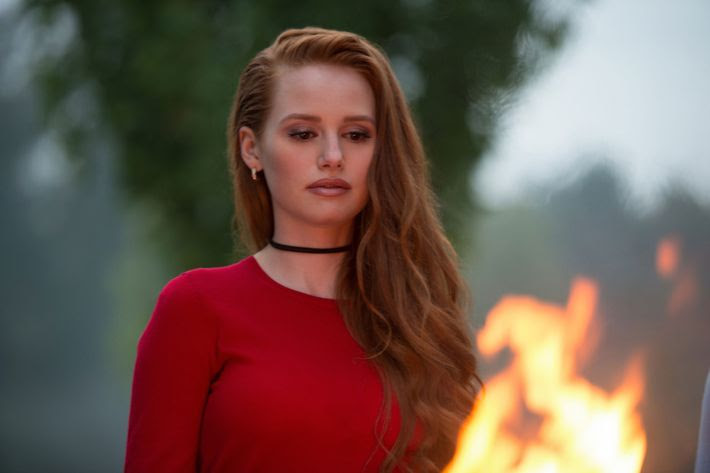 Anyone else weirded out when Betty called Chuck Jason and referred to herself as Polly?

So Dilton Doiley saw Miss Grundy's car at the river? Did he see Archie too?

Jughead's narration at the end reveals that Chuck gets booted from the team and that there are devastating consequences down the line from this. Ooh what's going to happen?
Posted by Greg at 8:55 PM