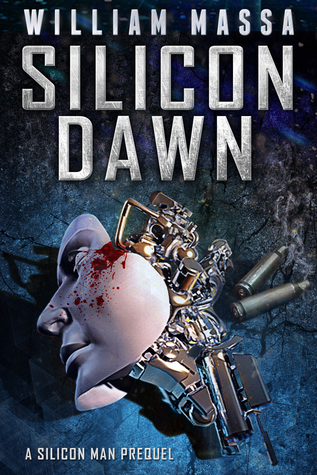 Silicon Dawn is a dystopian where androids, or mechs, are everywhere and humanity feels threatened by them. Adam is a mech who has just arrived on Earth and he is a state of the art model, with capabilities far beyond human. He pairs up with Jane Malveaux, a cop who doesn't like mechs (to put it mildly), and together they have to solve some particularly gruesome murders that seem to have their root in anti- mech hysteria. Like most books of this kind the emphasis is on what makes us human? Adam discovers that he does have feelings and attachments to people and this complicates his life, making him more than just an android doing a job. Malveaux also has to re- examine her beliefs and feelings when her and Adam are thrust into situations that shake up her preconceptions.

I thought this was well done for the most part, and I enjoyed the dynamic between Adam and Malveaux. there are some chilling moments as they discover that things are even worse than they initially thought, and I thought the evolution of their relationship seemed realistic. There were a few things I thought happened a little fast, but then this is just over two hundred pages so it's not a long book, and therefore by necessity I think we have a slightly  faster timeline. I also enjoyed the world, the author seems to be going for that rainy, neon drenched Blade Runner feel and I think he succeeded for the most part.

This is billed as a prequel to Silicon Man, which I haven't read but probably will. I'm curious to see what the next book is like since it takes place ten years after the events of this story. It will be interesting to see what developments in mech technology that are hinted at here look like. Also I was impressed at the way questions were raised about what it means to have a personality, when does an AI become human or have feelings- and what happens once they do?
Posted by Greg at 2:00 AM