We start off with Jon, picking right up after last week. It's a powerful opening, with Davos watching while Jon is basically... alive. For a long time people have wondered how this was going to happen, and now we know. I actually didn't think it would be Melisandre who brought him back, or at least not her alone- I thought it would involve his direwolf and warging- but apparently not. If it had been done that way it seems like it would be more true to his northern heritage, but what do I know? Melisandre arrives and is shocked- she clearly didn't expect it to work!

They ask Jon what he remembers and he said he encountered... nothing. Interesting take. Mel says Stannis was not the Prince who was Promised after all- but someone needs to be. Jon has a nice reunion with Tormund and Dolorous Edd. This was probably the highlight along with the Tower of Joy sequence, of the episode. We check in with Sam and Gilly who are at sea en route to Oldtown- not much happening there.

And then we come to the Tower of Joy. Everyone's been waiting for this- the faceoff between Ned Stark's seven and Ser arthur Dayne's three. Except... there are only two Kingsguard there. Dayne and who was the other guy? So it's seven vs two- I guess to make Dayne even more of a badass. They did pull some dialogue right from the book. "I looked for you on the Trident," says Ned.

And now it begins," says Arthur Dayne.
"No," replies Stark. "Now it ends." 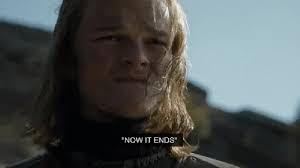 The fight was okay, nothing spectacular but pretty good for this show. It was interesting to see it realized- the Tower of Joy flashback in the first book is one of my favorite moments of the series, it's just so powerful when Ned tells Bran about it and how Howland Reed saved his life. Seven vs three (in the book)- and only Stark and Reed survived, to find Lyanna on her deathbed (which we didn't get to see here).

I wasn't overly impressed with the Dany segment, she's at the dosh khaleen but we're three episodes in and it's clear this is going to be a significant part of the season- getting her out of there, probably with a khalasar at her back (or all the Dothraki?) Varys/ Tyrion finds out that the Masters of Astapor and Yunkai, along with their allies in Volantis, are funding the Sons of the Harpy. Tyrion decides to send a message to these enemies.

The worst part of this episode for me was the Cersei/ Jaime segment, followed by Tommen's meandering conversation with the High Sparrow. that was pointless, but the biggest issue for me is Jaime. He suggests sending zombified Gregor to kill the Sparrow- I'm sorry, in my opinion the book Jaime would never do that. If he wanted it done he would do it himself. The deviation from the books here is a big fail in my view-  the rich, nuanced Jaime Lannister of the books, with his newfound honor, is reduced here to a petulant one note character who basically just wants revenge along with Cersei. Bo-ring.  I don't have anything against the actor, it's just that the Jaime on the show is written terribly.

I thought the Arya scenes were effective and I'm very curious to see where this goes, as this is one area where they have not deviated from the books much yet and therefore we have a great chance of seeing book spoilers here. Will the Faceless Men send her to Westeros soon? The biggest surprise of the night (and a HUGE deviation) was Lord Umber bringing Osha and Rickon to Ramsay. Of course in the books Rickon is apparently on Skagos, so this doesn't happen (at least not yet)- what are they doing here? Are they going to write off Rickon to reduce the mount of Starks still alive? It doesn't look good with the direwolf being dead. This frankly kind of pissed me off as the Umbers are pretty loyal to Stark, I don't see Lord Umber doing this- but with wildlings coming down who knows? And which Umber is it? In the books we have two Umbers- Crowsfood and Whoresbane- in the field. I imagine the show is just simplifying things here.

Back to Jon- we close out with him executing the traitors and leaving the Watch. His leaving is not a surprise- many have speculated that Jon comes back no longer beholden to the Nights Watch since  they murdered him- but that doesn't seem to play out here. He's still Lord Commander until he quits- hence the title of the episode "Oathbreaker."

Here's how Ned dreams of the Tower of Joy in the book.

"I came down on Storm's End to lift the siege," Ned told them, "and the Lords Tyrell and Redwyne dipped their banners, and all their knights bent the knee to pledge us fealty. I was certain you would be among them."

"Our knees do not bend easily," said Ser Arthur Dayne.

"Ser Willem Darry is fled to Dragonstone, with your queen and Prince Viserys. I thought you might have sailed with him."

"Then or now," said Ser Arthur. He donned his helm.

Ned's wraiths moved up beside him, with shadow swords in hand. They were seven against three.

"And now it begins," said Ser Arthur Dayne, the Sword of the Morning. He unsheathed Dawn and held it with both hands. The blade was pale as milkglass, alive with light.