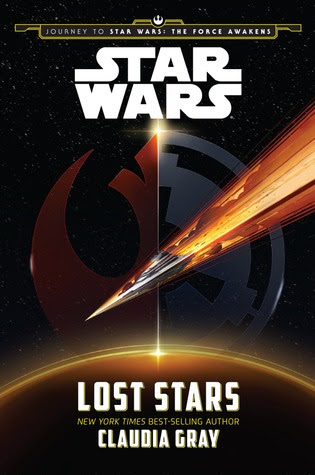 Lost Stars is a Star Wars tale that spans the events of the original trilogy, told from the point of view of two characters- Ciena Ree and Thane Kyrell- who become childhood friends and grow up to attend the academy together. Both are excellent pilots and are destined for service in the Imperial starfleet- but events conspire to tear them apart and Thane eventually becomes part of the Rebel Allaince. From that point they are on opposing sides of the conflict- and we see iconic moments from the films through their eyes. This is also billed as a YA love story, which seems accurate, as the characters grow from friendship into love as adults.

I read this primarily due to the glowing reviews I saw at amazon. I was exploring Star Wars titles as I wanted a line on the upcoming Star Wars film The Force Awakens, and I kept seeing "read THIS one". So I gave it a try. To be honest, while this is a fine book and well told, it didn't blow me away. It's good and worth a read, especially if you want hints of the new Star Wars state of affairs, but it's not a must read in my view. I kept turning pages, but I wasn't enthralled- if anything, it seemed a bit too convenient at times how the characters were involved in EVERY major event in one way or another.

If you're looking for spoilers or hints to the film (which I was) there's not a lot- until the end. The end frankly seems like a prologue to the new film, in the sense that we get a glimpse of something that will show up in the movie ( we know this from the trailer). I can't say much more without spoiling it, except that the very end is basically a lead- in to the movie. So if that interests you, this might be worth a look. At the same time, it's not a huge spoiler and if you don't read this it won't affect your movie experience at all.

The thing I liked the most about this book were the different viewpoints of the characters. Ciena comes from a culture that values duty and honor above all else, and so throughout the story she remains steadfast in her devotion to the Empire. Later she begins to realize what a mistake she's made, but it's too late at that point- as she rises through the ranks she finds it harder and harder to reconcile her morals with her position. Thane, on the other hand, is cynical and comes from more of a privileged background, and when he leaves the Empire it creates a rift between the two of them that is very hard to bridge.

They neve stop loving each other though, and while I didn't feel much tension throughout the bulk of the story, I did feel a bit at the end. The best part for me is the way they both examine their values and decisions- Ciena feels the Empire epitomizes law and structure and cannot imagine the Rebellion as a positive force, where Thane also struggles with the Alliance at first and feels that even if the Empire is defeated things won't get much better. Surely the New Republic will be corrupt as well, later if not sooner. It's a look at the values and emotions behind the conflict, rather than just good vs evil.

So my verdict on this one- if you're a Star Wars fan and want a little insight into the upcoming movie, it might be a good read for you. Is it essential reading? I don't think so, I the recent Heir of the Jedi a lot more which focused on Luke Skywalker. A good book but I'm a little ambivalent.