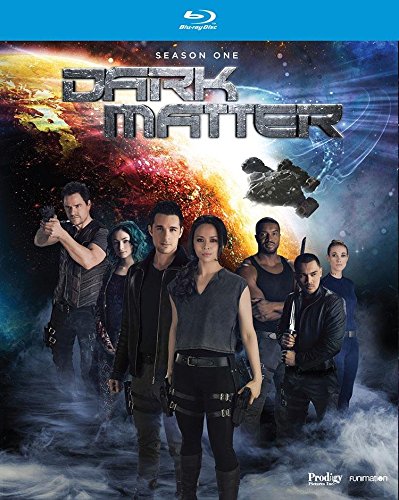 Dark Matter is an awesome new show on the SyFy network. It's a Canadian production about six people who wake up from stasis on a starship with no memory of who they are. Not even knowing their names, they decide to call themselves by the order in which they woke up. So the first one to awake is One, and so forth. All six of them seem to have unique skill sets, whether it's fighting or ship piloting or whatever. There also an Android (why doesn't she get a name?) who helps to run the ship.

The crew find that their ship is headed for a planet with a mining colony, and that they are mercenaries hired to wipe out the colonists for a megacorporation. The problem is, with their memories gone they no longer want to kill innocents. That choice will set the stage for later events and put them on the run across the galaxy.

Every character on this show has a secret and over the course of the season we get to see some of those secrets revealed. Allegiances and relationships are tested, but at the same time the crew slowly bond with each other (some more than others). By the end they are a relatively tight knit group- but there are betrayals and lots of surprises. The series itself ends on a high note, with a huge cliffhanger, a shocking reveal and a second season due in 2016.

This show is well done, with interesting characters and good writing. There's also a lot of humor, which helps on a show with occasionally dark themes. There are some big character revelations that happen that make you wonder if these people are truly who we think they are.

One of the more interesting is Five. She is a teenager who snuck aboard the ship and is a tech guru. She uses this expertise to slowly gain insight into the motivations and secrets of the crew- and not only that, but she has the other crew members' memories locked up inside her mind! We get to see snippets of what she sees in her dreams...

Another standout character is Two. She's a badass basically and the leader of the group. An expert fighter with secrets of her own, she's an important part of the show. And Android steals a lot of the scenes she's in, with her wry humor and facial expressions.

If you like sci fi with a diverse crew this show is worth watching. Along with The 100 this might be my favorite show right now.