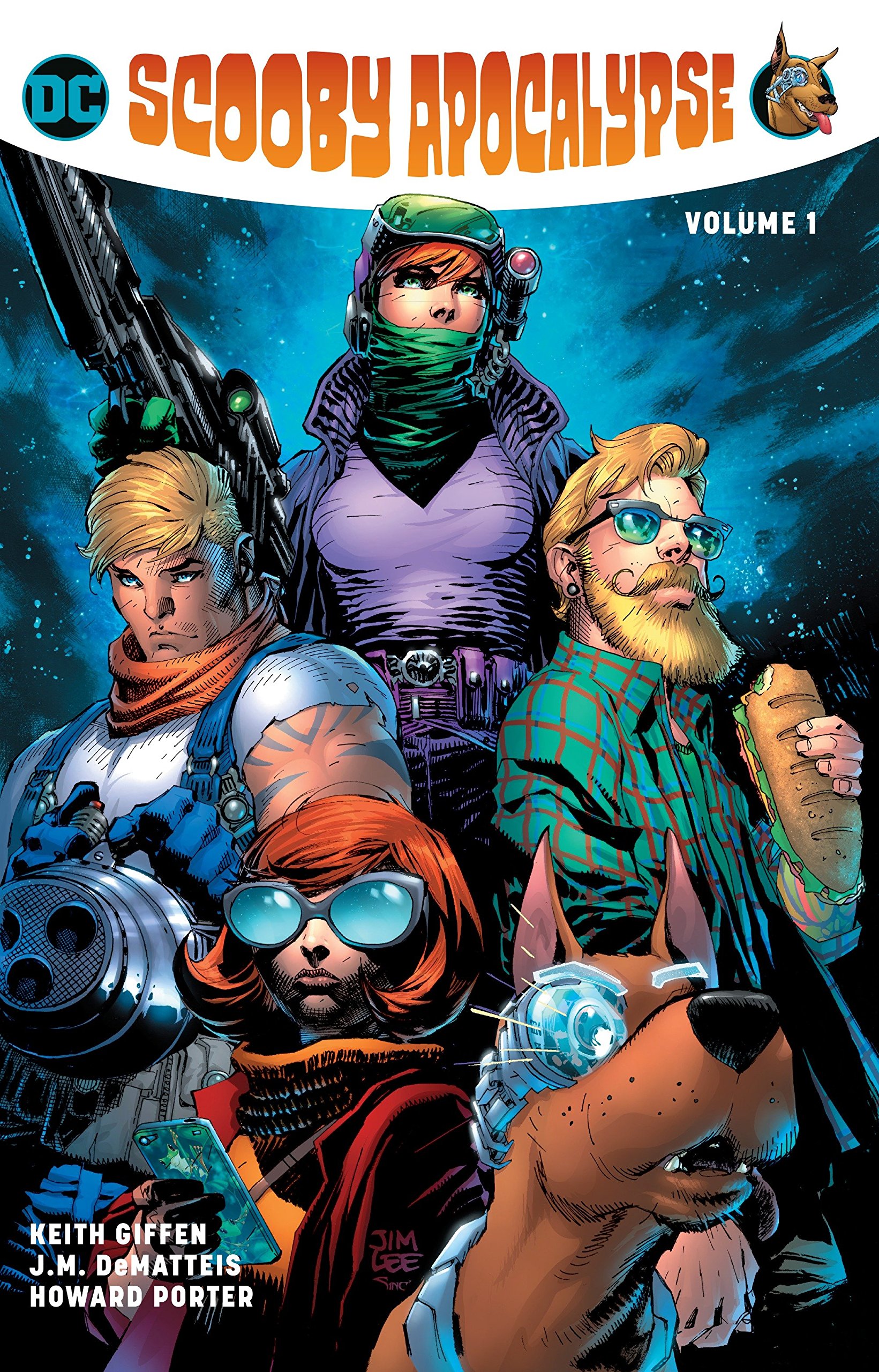 Scooby Apocalypse was a lot of fun! I tried this on a lark after seeing some of the cool cover art, and I was not disappointed. If anything it was a little better than I expected. This is a reboot of sorts, with the characters looking and sounding similar to their TV show counterparts, but they've been updated with new origin stories and the premise is apocalyptic, obviously. This first volume collects the first six issues of the series, and gets things off to a fast start. Velma is a scientist working for the Elysium Project, a top- secret endeavour to make the world a better place, but in reality the project has been disastrous, as a nanite plague has been spread worldwide and Elysium is the source.

Velma was having second thoughts about her place in the organization and had contacted Daphne, who is a journalist, to spread the word. Daphne and her cameraman/ best friend Fred arrive at the remote facility in the Nevada desert, but before Velma can get her warning out disaster strikes. The alarms go off and the facility goes into lockdown, and it soon becomes clear the nanites- or something- have changed people, and not for the better. The complex is overrun by monsters and they have to find a way to escape- but even if they do, if the nanite plague is worldwide, is anywhere safe?

This was a lof of fun, like I said. The dialogue is witty and I liked all the humorous asides- I also enjoyed the ongoing nature of it, the authors kind of seamlessly keep the story flowing through the issues collected here. This has the feel of a storyline that could be around for a while- they don't seem to be rushing it- and I think the interactions mostly work. It definitely had me laughing at times. The other thing is, even though the name of the cartoon is Scooby Doo, I was never that enamored of the title character or his buddy Fred much. However, here Scooby is reimagined as a prototype Smart Dog, with a rudimentary ability to communicate and a bond with Fred. As for Fred, he's described as a hipster doofus at one point, which seems apt, but he's not the stoner hippie he was in the original cartoon.

Another interesting touch is the relationship between Fred and Daphne. Daph is in the lead role here, while Fred is rather more hapless. He's got a thing for Daph, and a history of proposing to her, but she brushes it off, saying they're just friends. I don't believe that for a second, but it's a nice twist. And Velma plays a pivotal role here as well. Another thing I like is how the authors address the moral quandary of killing people that are not really people anymore. Some of the people they have to shoot were colleagues of Velma as well, and Daphne, being the only one skilled with firearms, still has a hard time with blowing the monsters away. They all struggle with it and I liked how that was handled.

The art is okay- I like the covers for this series, they're vibrant and they pop, but the interior art is a little less impressive. Still, it's not bad, and the scenery of the Nevada setting, and the interior of the Elysium base, are particularly well rendered. The colors in particular are there. It feels like a substantial comic too- the dialogue is extensive and funny, it's not one of those where you can read it in three minutes because there's hardly a story there. All in all, this is surprisingly deep and highly effective at telling a tense, apocalyptic story featuring characters that have been rebooted just enough to make them relevant.
Posted by Greg at 12:00 AM