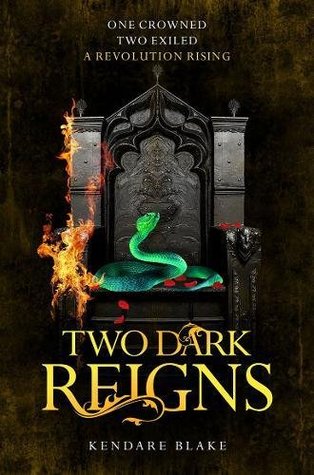 Two Dark Reigns begins shortly after the previous book, with the self- exiled queens Mirabella and Arsinoe having fled to the mainland, and Katharine ruling over the island of Fennbirn. Katharine has won, and with the abdication of her sisters would appear to be in a strong position to consolidate her rule, but new threats arise and a rebellion is brewing, even as Mirabella and Arsinoe must adapt to life on the mainland. As the third book in a four book series there is a sense that this is a set- up book, laying the groundwork for what should be a thrilling conclusion. I liked this one a lot, but it didn't quite rise to the level of the previous two for me.

Spoilers for the first two books.

Katharine's rule is troubled. Her mentor Natalia is gone, she is feared by her people and called the Undead Queen, and to make matters worse there is a new threat- the mist, which has always protected the island, is now coming ashore and killing people indiscriminately. Katharine has no way to stop it, and neither the priestesses nor the seers can or will help. Katharine has also killed her King- consort (in the last book) and is now faced with the question- is she essentially living poison? Is she truly undead? Meanwhile, Mirabella and Arsinoe are with Billy in his homeland, and Arsinoe in particular is not adapting well.

Billy is still devoted to her but his mother is not as enamored, wanting to marry him off to someone from the mainland, and Arsinoe is having dreams of another time and place- Fennbirn from hundreds of years ago. The series has been hinting at Blue Queens for a while and now we see a Blue Queen appearing to Arsinoe, and seemingly directing her back to the island. Mirabella however sees nothing, and they must soon decide where their destiny lies- in exile on the mainland, or back on the island of their birth.

I've noticed a pattern in the books- there's a big event at the end and Kendare Blake skillfully arranges events to culminate in that thrilling conclusion. I mean that can describe a lot of books, but the problem here is it is kind of noticeable that there's really only going to be a big moment at the end. At least that is my take on things. I still enjoy these, and one can debate whether this needs to be four books, but this is a fine continuation of the series- it's just that not a lot happens. At least until the end!

The end is pretty thrilling and changes the game in a big way, so there's that. I'm just going to round this out with some observations and thoughts.

I still like all three Queens- yes even Kat (when she's herself). Mirabella has always been a favorite and that continues here- she might be my favorite character at this point. I've always liked Jules too and in many ways this is almost her book- she plays a huge role.

We get a sense that prophecy is a mixed bag, a conundrum- very unreliable, subject to interpretation, which is also a take that George RR Martin plays around with in his books. I like that take.

Billy is likable and I've always thought he makes a good pair with Arsinoe, but I'm starting to think his development has stalled a bit.

All in all this is a solid installment and a nice read- it adds to the mythology of the island and we get face time with all three sisters, plus the supporting cast. The story moves forward and frankly I have no idea where it's going- stakes are high at the end of this one, and I'm definitely invested in these characters (I think I'm Team Mirabella at this point). And while it was a bit slow at times throughout the first half, it picks up steam towards the end and the conclusion is thrilling.
Posted by Greg at 9:50 PM