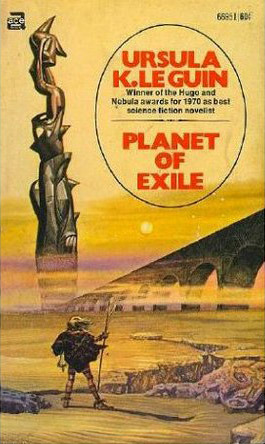 Planet of Exile is a story of a long lost colony stranded on a planet where seasons last for 15 years, so summer and winter are generational events. As the story opens autumn is quickly giving way to winter, and the world is rapidly changing for the colonists, known as farborns, and the indigenous people, who the colonists have dubbed hilfs (highly intelligent life forms). The colonists have been stranded on this planet for 600 years , and their population is slowly dwindling. Fewer children are born every year, there is a high incidence of miscarriage and over time other colony locations have been overrun or otherwise abandoned.
Against this backdrop we are introduced to Rolery, a hilf girl who is the daughter of a chieftain and a bit of a free spirit. Her people are nomads who have gathered to build a winter city where they can ride out the generational winter. This gathering place happens to be close to the farborn city. Not content with the drudgery of her daily life, Rolery ventures to the city of the farborns and there she encounters Jakob Agat, a leader among the farborns. Rolery and Agat form a connection after Agat saves her life, and as the story progresses they are brought together by mutual desire and the vagaries of fate. Agat needs the help of Rolery's father to bring farborn and hilf together to face their mutual enemy, the barbarian Gaal who migrate south at the onset of every winter. However it is precisely the forbidden attraction between Agat and Rolery that may prove to be the greatest obstacle to cooperation.
The Gaal migration, or Southing, threatens both farborns and the winter city as the sheer numbers of Gaal dwarf anything previously seen. The Gaal are not the only threat to appear with the winter snows, however... the mysterious snowghouls are not far behind and are feared by everyone, including the Gaal. As mistrust and betrayal threaten to derail their alliance, the only hope for hilf and farborn alike may just be Rolery and Agat.
Planet of Exile is a story of love and hope in the face of daunting odds. It also explores the themes of acceptance and regret, and the shattering of old prejudices. The viewpoint shifts between Rolery, Agat and her father as they each struggle with the changes winter brings. Planet of Exile is a great science fiction read and is very short as well. It's one of my favorite stories and I thought it held up well on rereading.
One thing I noticed upon re- reading this was the similarities between this story and the Game of Thrones series by George RR Martin. Both stories have seasons that can last a generation, both have an impending winter that could spell doom, the Gaal could perhaps be the wildlings... and the snowghouls are an eerie threat from the north that everyone fears...could GRRM have been influenced by this story? Hard to say, but regardless Planet of Exile is a great read from one of science fictions's most celebrated authors.
Posted by Greg at 12:00 AM