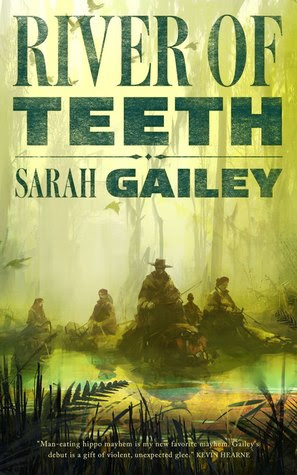 This one just wasn't for me. In spite of the awesome premise and the moody cover, I just couldn't get into the story. It's about a group who get together for a caper (it's not a caper- it's an operation) into the swamps of Louisiana to clear out the feral hippos that are making a mess of the place. Winslow Houndstooth has a contract from the federal government to do this, and he assembles a crack team of mercenaries- like him they all have secrets or other agendas- but Houndstooth himself has another reason for going into the marsh. He wants revenge against the man who wronged him.

This is a novella so there's not a lot of room for character development, but even given that there's a romance that feels way rushed. I didn't really care about any of the characters that much, and for a book that is billed as having lots of hippo mayhem I didn't see that much. Sure there's a bloody encounter here and there but this was mostly talking. I read it to finish it but I wasn't ever really wowed by the story.

A big part of the appeal here is, of course, the crazy hippos. They're wild and pretty dangerous, and the wranglers ride hippos themselves. Apparently there was a plan to introduce hippos as an alternative meat source in the 1890's but it never went far, so the author is going from a historical seed of truth, and taking it in a different and violent direction. I just never connected with the story. If this appeals to you I would say give it a shot, as your mileage may vary, but it just wasn't my thing.
Posted by Greg at 12:00 AM