Star Wars: Heir to the Empire 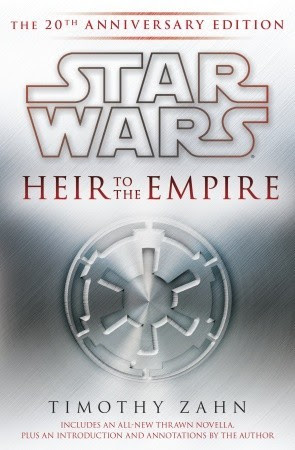 This is the first of the Star Wars Expanded Universe books I've read, and this one takes place after Return of the Jedi five years later. The book itself came out in the '90's and was the first book to continue the story from the movies- this was long before the prequels or the more recent reboot. And the Thrawn series, as these are generally referred to, seem to have a positive reputation in the Star Wars canon. I don't usually read a lot of movie tie- in fiction, so I had never read these, but after seeing the Force Awakens I was ready.

I liked this a lot. It was better than I expected and it largely felt like an authentic Star Wars tale. The characterizations were solid, the dialogue felt right, and best of all the main players from the original trilogy were present. One of the things that irritated me the most about The Force Awakens was the absence of arguably the main character- Luke Skywalker- from the entire movie, appearing only at the very end. Now granted the new movies are set thirty years after the original trilogy, and Heir to the Empire is set a mere five years after, but regardless this felt like a much more realistic continuation of the saga. The Empire has largely been defeated but is still hanging on, the New Republic is struggling to maintain control over the galaxy, and our heroes are still involved very much in the continuing struggle.

In addition to the usual characters this series is known for introducing two new ones- Grand Admiral Thrawn and Mara Jade. Thrawn is the mastermind behind the resurgent Imperial remnant, leading the Empire's remaining forces in raids and plotting a devious strategy to regain the initiative. Mara Jade meanwhile is a mystery at first- all we know is she is very capable and wants to kill Luke Skywalker. She was a covert asset for the Emperor before his demise, and blames Luke for her fall from grace. Jade goes on to play a significant role in the Expanded Universe books from what I gather, and she's a nice addition to the mythos from what I can see here. Thrawn on the other hand was a little too all- knowing and I never really cared much.

I like what the author did with the characters here. Luke in particular is portrayed as cool under pressure and competent, which makes sense seeing as how he's had five years to hone his abilities. Leia is done well and Han in particular was handled well. The droids play a pivotal role and even Lando shows up. It's a fine line between honoring the source and being slavishly devoted to it, and I think the author here did a fine job of threading that balance. He also shows us the heroes at the heart of the galactic commons- Coruscant- which is another thing I think was lacking in The Force Awakens.

In addition we get to revisit some old favorites- Dagobah for one- and there are lots of new planets, including the Wookiee homeworld Kashyykk. That was a nice element and serves to expand the feel of the Star Wars universe beyond the familiar planets. All in all this was a fun story, but mainly it was great to revisit these characters when they were still in their prime, still in the aftermath of the Battle of Endor, and see them struggle with both a resurgent Empire and a struggling new Republic.
Posted by Greg at 12:00 AM