All Systems Red (The Murderbot Diaries #1) 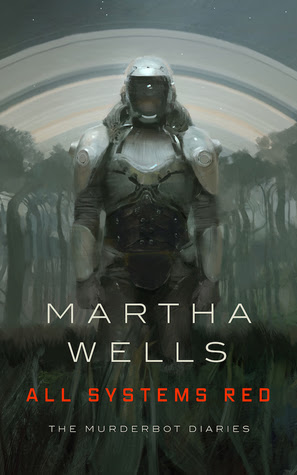 Okay this was awesome. I tried this on a lark, having read Martha Wells before, and this was a pleasant surprise. Murderbot (yes that's its name) is a security cyborg, part machine and part organic- but the thing that sets it apart is it's free. It hacked its own behavior chip and now, unbeknownst to all, its free to do as it pleases, including disobey orders. Security units are typically lent out to survey teams and planetary expeditions, and that's what Murderbot has done- accompanied a planetary survey team down to a harmless planet. Except it's not so harmless.

It turns out there are two survey teams on the planet, but when things start going wrong and the other team goes dark, Murderbot and its clients realize something is very wrong.The other thing going on is that Murderbot really doesn't care. Since hacking its chip and essentially freeing itself from control, it mostly does the minimum necessary (slackerbot?) and prefers to spend its time watching downloaded entertainment. Think Netflix dialed up to eleven? However when disaster strikes Murderbot realizes maybe it does care- just a bit- and it's a good thing too, or the survey team would be wasted.

Murderbot was awesome and hilarious. This is a novella so it's fairly short and I read it in one setting- I literally felt like I had to finish it. It's that good. And it's surprisingly compelling- I cared a lot for Murderbot and the survey team. The team itself is not super developed but I thought they were developed enough for me to care about them- and Murderbot takes a lot of punishment too trying to protect them! Good thing it can regrow or repair parts or it'd be in serious trouble! And there's a  good amount of tension as the team tries to figure out what's going on. A survey team, stranded on an uncharted planet with a self- aware murderbot (their only chance of survival), and some unknown group trying to waste them- it's as fun as it sounds.

I loved the planet and the general worldbuilding too. The planet is only partially mapped and it has a few secrets, as well as a cool ring (you can see on the cover). The details of the corporate setting- the area of space this takes place in seems to be run by corporate interests and some independent systems- felt real and futuristic but at the same time familiar (corporations are about one thing- money) and even the space station they find themselves on at one point felt like a place I'd like to explore. This is the first science fiction book since The Long Way To A Small Angry Planet where I thought to myself can I live there?

If you like science fiction and space opera I'd say this is a must- read. It's entertaining, funny and well thought out, and will definitely be on my favorites list for this year. I bought this as an e-book but immediately ordered a print copy after reading- this is one I'd like for my shelf and will probably re- read down the road. And the great news is there's going to be more. I can't wait.
Posted by Greg at 11:36 AM