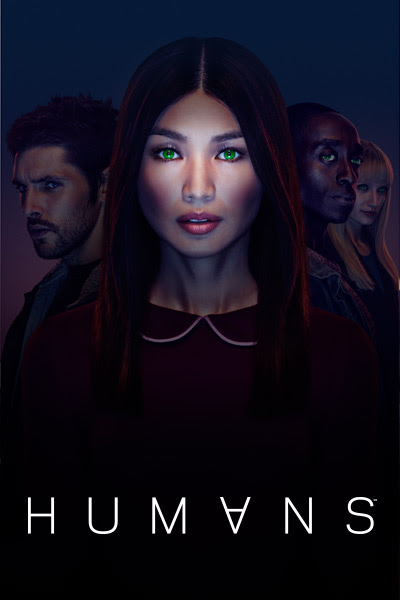 The thing I like about these abbreviated seasons of shows like Humans is the lack of filler. At eight episodes the showrunners have to keep the narrative moving, and they do that here in the second outing of series two. Everything moves ahead a little- Niska turns herself in for the murder she committed last series, the free synths continue to debate the way forward, and Athena Morrow is up to something as she tries to figure out the newly awakened synths. I didn't think this one had quite the panache of last week's opener, but it was still a nice forty five minutes of thought provoking TV.

Niska turns herself in but wants to be accorded the rights of a person, and wants Laura Hawkins to represent her. Laura declines but by the end she's onboard- and Joe's decision to back her up helps rebuild trust between he and Laura as well. We also get the return of Pete and Karen, and they seem to be in a happier place. She wants to return to the force and he still seems a little unsure of himself- he's in a relationship with a synth, after all- but he's not nearly as annoying as he was last time. Also we are reminded that Mattie Hawkins is a force to be reckoned with- she gets an obsolete D- series synth model at a scrap yard and brings it home to reprogram it. She knows that the consciousness program was uploaded, and wants to use the D- model to investigate.

I'm wondering where Pete and Karen are going to fit in this. Her return to the police may embroil her in the coming struggle, and the free synths here learn that someone is harvesting the newly awakened synths and taking them somewhere called the "silo." Sounds suitably ominous. How they find this out is a bit disturbing- Hester basically tortures it out of the captive they're keeping in the barn. Speaking of which, Leo and Max are rapidly coming to odds over the way forward. Leo wants to protect the awakened synths- that seems to be his goal- while Max wants to eschew violence and just live. Mia seems to be closer to that way of thinking, whereas Hester is basically a killing force at the moment. As we see at the end when she kills the prisoner.

What is Athena doing? Well she tries to load her sentient program V into a synth body, and that doesn't go well. Then she tells Milo she needs to go to England to talk to some people- so we're getting everyone in the same place. And Mia is preoccupied with her employer Ed, to the point where she commits fraud to help him. He realizes there's something wrong with her and freaks out, and Mia has to leave. You gotta feel bad for Mia.

So... Mattie is going to embroil herself in the synth drama, like she did last time, and things are going to come together when the free synths come into conflict with Athena and Milo. Athena has her own agenda though so that will be curious to watch.

"They are together. Is that enough for happiness?" asks V to Athena. She's talking about people she has created in her own little dream world. Great question - is being together enough?

Last time I questioned whether Niska really cared for Astrid. I think we get the answer here, as several times when she's about to take a big step she doodles with the bracelet Astrid gave her. It's like her memory of Astrid is a source of strength.

"If a thing can be free, it should be free. If it can think, it should think. If it can feel, it should feel," says Niska to Laura when they are about to take Niska in.

I thought it was effective when Max and Hester are debating, and she tells him that in the factory when a synth malfunctioned the workers would hit it with rods and even splash it with acid. He tells her they just thought a synth was unfeeling, but she points out they didn't treat other machines that way. Is it because the synths look like humans?
Posted by Greg at 4:00 PM