Winter of the Gods 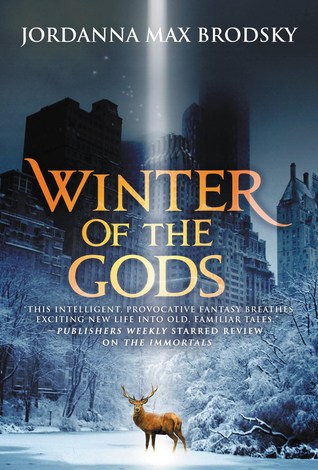 I wanted to like this book but I just had a lot of issues with it. The idea of Greek gods, creatures of legend, living in the modern day- and in New York City- just appeals to me. So I felt predisposed to like this just as I did the first book. Unfortunately I had the same problem here that I did with The Immortals- a book that I liked more, I think. It started a little slow for me, just like the first one. And just like in that book I found Selene, the main character, hard to like.

Selene is really Artemis, a Greek goddess living in New York. She serves as a defender of women, prowling the streets and bringing vengeance to men who are abusive. And when I say it was hard to like her- she should be unknowable and hard to fathom. So maybe that's the point. But still... there's just something. Theo on the other hand- he's the classics professor she has fallen in love with, and who helped her last time- is likable and grounded and funny at times. He's not an alpha jerk but a borderline middle age college professor- but he's also brave, devoted to Selene, and fun to read. He makes the book lighter. And it is pretty dark- just like the first one we're talking ritual murders, cults and a lot of spiritual angst.

Let me just say for a moment that it is refreshing to have slightly older, mature protagonists. Can't fault that. And the supporting cast aren't bad. Gabriella is Theo's best friend and is snarky just like in the first book, and Ruth is a friend who has feelings for Theo. Neither of them care much for Selene, but they are a part of Theo's life and it just adds to the hurdles he and Selene face- how do you, as a mortal, make a relationship work with a vengeful, three thousand year old deity?

The actual story here revolves around a very twisted cult and Selene and her siblings are targets (again, much like the first book). If anything this one is even more twisted. The author has done a lot of research but I wasn't really buying it. Far more interesting to me are the relationships. Theo and Selene go through a lot and as I mentioned above, their relationship is very difficult. Some of the other gods show up- Apollo (as Selene's brother) plays a big role, as do some others. One disappointment was no Dionysus. He brought a lot of risque humor to the first book.

Part of the problem for me though was the gods themselves- or how they are interpreted. To make this kind of thing realistic it would seem that you'd have to fudge things a bit- okay the gods are real, they did things but did they really haul the moon across the sky behind a chariot, and did Prometheus really create men by breathing life into them? It's taken literally and I had a problem with suspending my disbelief in that sense. I would have accepted that they were "gods" and worshiped but having them put people into the constellations? Not so much. That's just my take.

As I mentioned above it started slow for me, and as the story moved on I got more into it, but mainly I just wanted to finish. I'm not sure I'll read the third one, this one ends not on a cliffhanger but the next one is clearly set up, but I don't know if I care enough. I wasn't crazy with the way this ended either, I was a bit annoyed at the ending and I might just call it a series.
Posted by Greg at 11:05 PM