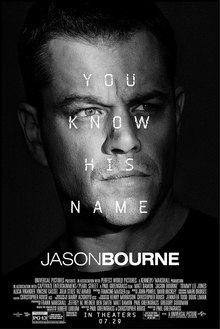 To say the new Jason Bourne movie was long awaited would be an understatement. I'm a big fan of the first three movies, I feel that they got progressively better and more expansive as they went along, and it's hard to believe the last Bourne movie came out in 2007 (I'm not counting the Bourne Legacy from 2012 as that had a different character). So... it's been a while. Is Bourne still relevant? And is the new movie any good?

Well yes and no. It tries really hard to be relevant with a sketchy background plot about surveillance and how it pervades our lives. The Snowden leak is referenced and they're obviously riffing off that- the tug of war between privacy and the government's responsibility to fight terrorism. I think the movie might have been better served by sticking with the Bourne plotline- in the last film he remembered everything and walked away, and has been off the grid. Find a way to being him back but keep it focused on the covert programs- I think that's where the franchise shines.

And to a certain extent they do that. Nicky Parsons is in Iceland hanging out in a hacker den and finds info that shows the CIA is still in the black ops business using assets like Bourne- the program just has a new name. She also finds a personal connection to Bourne, and goes to warn him. That's the hook that draws him back in. I have to say it was nice to see Nicky again, and her and Bourne working together- I would have liked to see more.

The problem is they kill Nicky off in a way very similar to how they killed off Marie in the second film. It's irritating frankly and she was the last returning supporting character- why kill her? She's a perfect ally and adds a lot to the story
And that feeds into a common complaint I've heard about this movie- it feels like a greatest hits package, like they're trying to catch all the great beats from the earlier movies.

I think there's something to that. I think this is the least entertaining of the Bourne movies- it's still good, but it doesn't quite hit that standard for me. This film sorely misses Pamela Landy from the last two films- her role as deputy director of the CIA was a crucial element that is missing here. And let me just say why. I am so sick of Tommy Lee Jones. In this one he is the CIA director and has almost no nuance- not only am I sick of him but he doesn't match the nastiness of Noah Vosen from the last movie. I can see why Vosen wouldn't be back as he was apprehended in the last one, but Landy... her presence would have improved this movie immensely.

What about Alicia Vikander? She is coming off a great performance in Ex Machina and is clearly the new blood in this movie. She plays a CIA analyst who is a whiz at predictive modeling and she soon questions the CIA director's motives. Frankly I found her a bit flat- she does a fine job but there's little fire there, and she certainly does not match up to Nicky even if she is more technically proficient. She does have a bit of nuance and you wonder at times whose side she's on- that's good- but I wasn't super impressed.

So that leaves Bourne himself. As usual it's fun to watch him do his thing, but I just think nothing here really compares to the first three movies. Again those three seem to get better every time- the action more intense, the stakes higher, while here there is less fighting, it's not nearly as exciting as the previous movies (which always had a set piece fight between Bourne and an "asset" that was a highlight of the film) and I just don't think this matches up. This one has an "asset" too but he doesn't feel real to me- he's so incredibly ruthless that he's a cardboard character. In the previous films we got little glimpses that at least these people were human beings, that even though they're killing machines they're somewhat human. This guy is just all villain and I was bored with it.

Or maybe they're just going to the well one too many times. After a nine year absence maybe they need a new template, rather than just regurgitate the same moves. The movie does have nice moments but it's definitely a disappointment. The magic seems to be gone. It's very slick with all the hacking and tech stuff, a few times I thought can they really do that? So in that sense I think it makes the audience think. But by and large it feels like three set pieces - each one too long - and the payoff just isn't there.

If you're a Jason Bourne fan it's worth seeing, but it's not as good as the first three.

And I still think this is the high water mark of the franchise from the third film. Nothing in the new film matches this.