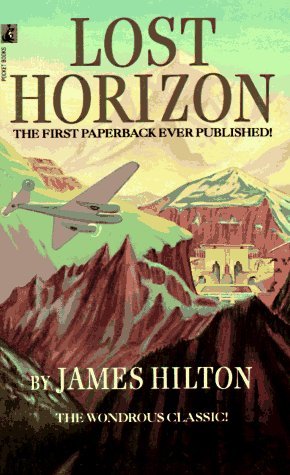 So the Lost Horizon readalong is complete! Big thanks to LaLa for reading along with me- this was a fun one. And kind of a relevant read too, in many ways- at least I thought so. In the era of virus pandemic it was very interesting to read about a place of refuge like Shangri-La. A place where those weary of the world can perhaps retreat and find an escape. But is the escape worth the price? That is, of course, the central question of this story.

I'm not going to do a review of this story, rather I wanted to just generate some discussion and mull over some of the questions raised by the book. So, without further ado, here are my thoughts and questions. And anyone please feel free to jump in! Whether you've read the book, or even if you haven't but just want to weight in- I'd love to know your thoughts. Have you read Lost Horizon?

So the gist of the story is that four people being evacuated from India during a revolution are kidnapped and taken to remote Tibet, where they find a lamasery hidden deep in the mountains. And this will get a little spoilery so heads up if you want to avoid details. The protagonist is Conway, a world weary British official who slowly comes to realize that maybe their arrival in Shangri-La was no accident. The lamasery itself is a refuge from the world, hidden away and remote, and yet they have some modern amenities- and even more astonishingly, they also seem to have a way to prolong life. Before long Conway and his companions must decide- do they want to stay in Shangri-La with its possibility of extended lifespan, or do they return to the outside world?

The first sentence made me laugh as it references old school friends and how they find, oftentimes, that they have less in common than they remember!

"Americans, Conway reflected, had the knack of being able to say patronizing things without being offensive." Hmm... I'm not sure that's true anymore!

"What most observers failed to perceive in him was something quite bafflingly simple; a love of questions, contemplation, and being alone." Said every introvert ever!

Brinklow adjusting her hat as their plane crashed!

Okay, so... the promise of Shangri-La is not only escape from the outside world, but a stewardship of the world's cultural treasures and knowledge. A repository of wisdom against the threat of future annihilation. The tricky part is- once you're there, you're not allowed to leave. How would you feel about being rescued and finding peace in a sheltered valley, with an extended lifespan? Would you want to go?

Complicating things is the fact that the High Lama encourages people to be brought there- so rather than just an occasional itinerant seeking knowledge, people are actually brought there against their will. And it's hinted that while the lamas may not physically prevent one from leaving, they may withhold the aid that would be necessary to survive the journey to the outer world.

I kinda think this validates a lot of Mallinson's objection to the place. I found myself thinking throughout the book that I'd be happy to stay there (especially during this pandemic) but... does this intentional deception make the place evil in some ways? I think you can argue yes.

I love the setting- the blue rooftops, colonnades, lotus pools and pavilions. The library sounds lovely with its bays and alcoves and is described as spacious and lofty.

Do you ever feel like you don't have enough time? Conway feels that if he stays he will no longer have to worry that he is wasting time in idleness. With a longer lifespan he can indulge in whims, study subjects that might seem frivolous in the outside world, and just generally have what we all crave- more time?
Posted by Greg at 9:11 PM