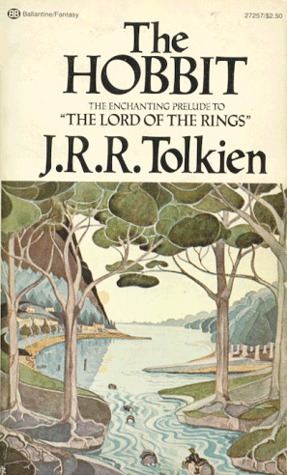 The Hobbit was a re- read with La La in the Library and I was so glad to revisit this world. I wasn't sure how I would feel about this book now- I first read it years ago and it's been a few years since I read The Lord of the Rings as well, so I'm a little rusty on my Middle-earth? I needn't have worried, however. This was like putting on a warm blanket and settling in with a nice mug of tea. I was very happy to join Bilbo and company on their journey There and Back Again.

There have been so many reviews of this, and so many have seen the movies/ read the book, that I won't review this as such. I'm just going to share, in no particular order, my thoughts and observations as I read.


The other issue that is fascinating to me is the idea of a haven in dangerous lands. I've noticed that Tolkien seems to like to place unassailable safe points in wild, untamed areas. Rivendell of course comes to mind most prominently, but I was struck by Beorn's place as well. The company are told that they are safe there, although they should refrain from venturing outside at night- the implication being that Beorn is in bear mode, not to mention the apparently large numbers of bears who congregate with him!

These places serve as a safe haven though, a place for respite and camaraderie, amidst the dangers of the wild. Some other havens that come to mind would be Tom Bombadil's house in The Fellowship of the Ring, and even the Eagles' eyrie, where they briefly shelter in this one.
Posted by Greg at 7:26 PM