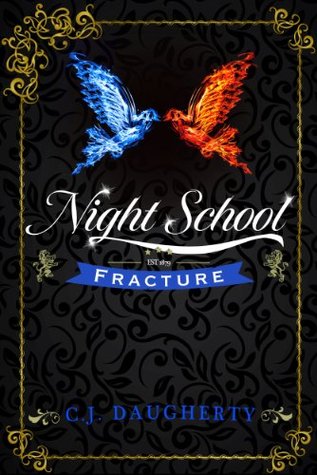 Night School Fracture picks up where the second book left off- Allie is in a dark place after the events of the last book and she is lashing out at those around her, even if she doesn't realize it yet. Furious and heartbroken over the loss of someone close to her, she decides to set out on her own to achieve vengeance- and sneaks away from the academy to go her own path. Of course this is not the best idea in the world, and since this is a Night School book it's probably not a spoiler to say she ends up back there- but this is an Allie that's very troubled in this one.

This was my least favorite of the three Night School books I've read so far- and yet I still enjoyed it. The problem is right from the beginning- Allie makes questionable choices, puts others at risk, and leaves behind those who can help her. For someone who has settled into life at Cimmeria academy and come to grips with her heritage, it seems kind of dumb. Yes she is grieving, but she's also been seriously injured in the last book- so how far was she going to go anyway? I felt like the author was trying to paint Allie's grief and angst so strongly that she went overboard a bit. Once Allie gets back to the school and back in with her friends it starts to feel like a Night School book again.

Which is not to say the author should always play it safe. In fact this one deson't seem to add much to the plot- the students have to step up when it seems like the intructors have dropped the ball- and Nathaniel is still preparing to strike, but really wasn't that the premise of the first two books, more or less? I was expecting more here. Other than some revelations about the organization behind Night School this was another three hundred plus pages of life at the academy, with the usual skulking around and plotting. Not that that's a bad thing- I like Cimmeria and all the skulking. It seems like each book is more or less covering a school term- this one starts after the disastrous Winter ball from last time and takes us into the spring.

The other issue here is the spy. I was pretty sure we would find out the spy's identity in this one- but no. I'm pretty sure I know who it is, based on a clue from book one- yes that far back and still no resolution. Since this is a five book series I can see that this is maybe getting stretched out a bit, but still the opportunities were there in this one to reveal the spy with a splash- instead this feels somewhat like a retread of the second book. I think a little more needed to happen here. Still, I enjoyed this. The academy feels comfortable now, and frankly I enjoy the camaraderie between the students and the scheming and plotting.

It's a fun place to spend time. As I've noted before, the only thing this series needs is magic or the paranormal. It's got everything else going on for a boarding school book. The place has atmosphere and I love the students. Katie the mean girl gets a bit of nuance in this one- you want to like her but she's so nasty to Allie it isn't even funny. Zoe is back and steals most of the scenes she's in- don't let anything happen to Zoe!!!- and Carter and Sylvain continue to vie for Allie's attentions. Although the love triangle is seriously getting tedious- Allie is more or less with Sylvain now and Carter is with Jules, but she's so unsure of her feelings and we see this seesaw back and forth between the two. It's getting annoying.

So I think the love angst needs to go away or get reasonably tamped down going forward. It grated in this one- did Allie regress- she was so tough and confident in the first two books and here she's a mess- I know the author is probably trying to develop her but this is the first book where I felt like I didn't click with Allie. Everything else is fine other than the slow moving plot. But the setting and the interactions between students still makes me turn pages. I like that Nicole stepped up in this one and became part of the group. And Cimmeria's vaunted security as usual is not up to the task of keeping the students safe! So much for the best security in the world- but I guess if they were we wouldn't have a story!