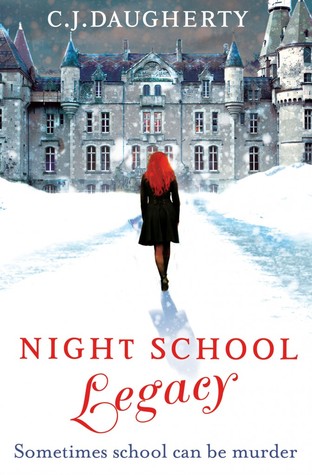 Two months after the events of Night School Genesis we find Allie on the run after meeting her old friends in a park. She's back in London briefly to spend time with her parents, but when the people after her show up it's time to head back to Cimmeria Academy where she's safer. And so the fall term begins at the exclusive academy and we revisit the intrigue surrounding Allie and her family. This was a pretty satisfying follow up to the first Night School book, with more of the same beats that made that one successful. Allie is reunited with her friends, still doesn't know everything that is going on, and still has issues with her love life.

Allie and Carter are together but there is a simmering undercurrent of attraction between her and Sylvain. She's not sure she can forgive him for what he did in the first book, but he did save her life and she believes he's changed. Carter of course wants her to have nothing to do with Sylvain, and a substantial part of the story concerns the love triangle. To be honest I'm not sure how I felt about this. On the one hand I think the author skillfully handles it and the moments feel realistic- even when someone did something that annoyed me, I could see it happening that way. I think maybe a YA reader could relate to Allie's feelings if they experienced similar relationship issues in their teen years. At the same time it felt like a bit too much drama- it's like she's been with both guys now, is she going to go back and forth?

So I was a little more conflicted about the love triangle in this one, it felt more natural in the first book.  The supporting characters- Allie's classmates- were fun in this one just as they were in the first book. Zoe in particular was a welcome addition- she is a part of Night School and Allie is paired with her for self defense training, and after a rocky start they hit it off. Katie Gilmore as the resident mean girl wreaks more damage in this one- she makes clear early on that the truce is over. And Jo is back as well, Allie's friend who has troubling issues of her own. The dialogue between the friends and their evolving relationships are one of the best parts of this story.

We spend the fall term at Cimmeria and everything comes to a head at the Christmas ball, but although we learn more about Allie's family and the threat posed by Nathaniel, we don't learn that much, and I feel like the plot could have been advanced more. I know this is a five book series though so maybe that's just the pace we're going to get. Given the nature of the threat I'm a little surprised they would put Allie- who is clearly a target- in harms way. That just doesn't make sense. As intelligently as this is written that seems like a pretty obvious flaw.

I remember a clue from the first book as to the identity of the spy but other than a few hints we don't find out who the spy is. I thought we would get a little more but I guess that speaks to the slow plot development I mentioned. There was an occasion or two where I thought Allie could straighten a few things up by just speaking to the headmistress Isabelle but they did communicate effectively for the most part. And I have to mention the school security- by the end of the book I was a little amused that they keep having security breaches in spite of the reputation of the security team. In spite of this I enjoyed this book a lot and I'm really enjoying the dynamics of Cimmeria academy. Oh and I have to mention night tennis. Sounds fun. Another day at Cimmeria academy I guess.
Posted by Greg at 12:00 AM