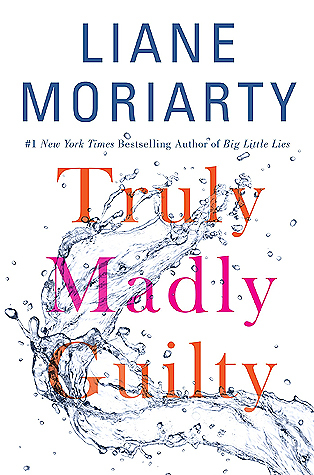 I've been looking forward to this book since I read Big Little Lies, which was my introduction to Liane Moriarty's writing. I loved it and went on to read The Husband's Secret, which I also enjoyed, so this is my third go around with Moriarty. I've seen some mixed reviews, so frankly I wasn't sure what to expect, but I have to say I was not disappointed. I think Liane Moriarty has a knack for showing us the richness and absurdities of middle class suburban life, the folly and the joys of a first world lifestyle. This is a book about consequences, about accepting ourselves for who we are- and for accepting those around us for who they are. And perhaps most of all, for appreciating what we have.

This story is about what happens at a barbecue, and how it affects the lives of three couples afterwards. Like the ripples in a pond when a stone is thrown in, actions and consequences spread out and affect everything after. The heart of the story is the relationship between Clementine and Erika, two friends since childhood- and do they ever have baggage. Erika grew up with a hoarder for a mom, and so Clementine's mom took her in almost as a second daughter- and in her well meaning way she forced Clementine to befriend Erika. Over the years they truly became friends, but there are resentments on both sides, regrets and mixed feelings, and this affects their relationship. When something terrible happens at the barbecue, these fault lines are exposed and everyone is forced to reexamine their lives.

Moriarty tackles a lot of issues in this book- there are a lot of things going on. Perhaps too many? I don't want to get into spoilers but let's just say there are marriage issues, mental health issues, guilt and forgiveness- even a look at how these things affect kids. If it sounds a little heavy, it can be, but it's also funny and at times shocking. I suspected early on what had happened and was wrong, it went a different direction and there are a lot of side issues as well. And I was moved a bit by the end, a few things happen that I wasn't expecting and that made this a very thought provoking read for me. So many things happened here that I suspect I'll be thinking about this book for a while, sorting out my feelings.

I just want to mention too the humor. Maybe it's me but Moriarty has a way of portraying the middle class issues of this generation spot on. As serious as this book can be, I laughed a lot reading it- and that's certainly been the case for the other books by her that I've read. There's a wry voice throughout the narrative that pokes fun at our middle class lifestyle. And I love the way she uses Sydney as her setting- it's always nice when an author can share a place they know effectively like that.

Moriarty's books make me think and they make me laugh. A good combination. Big Little Lies is still my favorite but this one is good as well- I probably liked it as much or more than The Husband's Secret. And while I was nearing the halfway point and stating to get a little frustrated that I didn't know what happened at the barbecue yet, once the reveal happens I couldn't stop reading. And there's more than one reveal, so this kept me guessing. If the premise appeals to you or you just want to read a well written (and funny) look at how one event can change everything, this is an excellent pick.
Posted by Greg at 12:00 AM