Star Trek The Animated Series was a twenty-two episode series that featured voice acting from the original cast. I've seen a few of the episodes over the years and the thing that I remember best was the music. That and the sound effects, which at times made for a tense experience. I think the show captured the feel of the original series pretty well, while at the same time blazing its own trail. So I thought a rewatch of both seasons was in order, and I'll be reviewing these and providing commentary as I go.

Today is episode 1x05 More Tribbles, More Troubles. Stardate 5392.4. Tribbles! They're back- yay! I'm down with tribbles. Small, fuzzy things that trill- what's not to like? Um, well I guess they eat a LOT. Especially grain. See the Enterprise has been assigned to escort two robot grain ships to Sherman's Planet, where apparently there is a famine or something. You can see this coming. Quintotriticale- that's the name of this particular grain. I think I remember that from the original series episode The Trouble With Tribbles. It appears that a Klingon ship is pursuing a small scout craft nearby, so the Enterprise has to intervene. 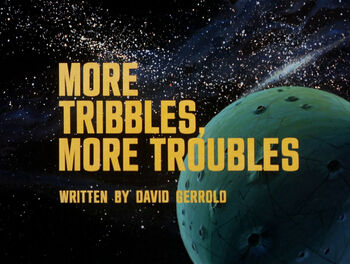 Guess who's on the ship? Yup- Cyrano Jones. The dufus who caused all the trouble last time around with tribbles. But we'll get there. First the Enterprise has to rescue Jones from the Klingons, who are lousy shots as it takes forever for them to blow up his ship. Luckily the Enterprise beams his aboard just in time, although it's iffy. Mr. Scott has trouble with the transporter...


"That blast decalibrated the integration parameters."

Right. Anywho the Klingons aren't playing around and attack the Enterprise with a new weapon- some kind of stasis field that shuts everything down- including their weapons. Bummer. To which Uhura replies,

"Well we could always throw rocks."

The Klingon captain informs Kirk that he wants Jones, who has committed "ecological sabotage," as he puts it. Not surprising. Kirk is all like the first Klingon who boards will be the last Klingon. See that's why I liked Kirk. But wait... the robot ships! Somehow the Enterprise still has control of those, and Kirk tells Sulu to bring 'em back and ram the Klingon ship with them. Really??? Spock warns him that they can't afford to lose the grain, but Kirk isn't having any of that.

The Klingons go apeshit and partially blow up one of the grain ships, but the power drain on their new weapon is too much and the Enterprise is freed. The Klingons hightail it out of there and Scotty is finally able to beam Jones in. Kirk tells an ensign to seal that part of the ship after they see that Jones has... tribbles with him! Jones declares the tribbles are safe, however, to which Spock replies,

"A safe tribble would be a contradiction in terms."

You tell 'im Spock. Still, Jones has an angle. See he's brought a tribble predator aboard- a glommer. Nasty looking thing! And cracks me up- he demonstrates the glommer's capabilities by releasing it, with it apparently devouring a tribble off screen. I imagine as a kids' cartoon the lovable tribble being, well, glommed was considered too upsetting? Probably for the best. Kirk of course wants to know how Jones escaped space station K-7, and why the Klingons were after him. Jones admits to selling tribbles on a Klingon world, which Kirk takes a dim view of since tribbles and Klingons do not get along. Also Jones is in violation of three Federation regulations and forty-seven local ones, so he's in trouble.

Kirk and the officers are discussing the Klingon weapon and Spock feels (well, not feels) that they may attack again once they're recharged their power. Their new weapon apparently drains their weapons just like it does their opponents', making its usefulness somewhat limited. But they seem to want Jones pretty badly. Could there be more to the tale? Meanwhile Scotty has transferred all the grain from the damaged ship aboard the Enterprise, and he's not happy about having all that quintotriticale all over the ship. Plus tribbles. And ominously we see the tribbles have found the grain...

McCoy has determined that Jones told the truth about one thing- the tribbles do not reproduce (he genetically engineered them that way I guess). They just get fat. And we see one quite large specimen in the cargo hold- yikes. But the glommer is on the case and jumps it. Ack! Meanwhile the Klingons are back and are after the grain ship? They destroy its propulsion units- why do they want the grain? The Enterprise and the Klingon ship are mixing it up, firing on each other, and oh no- the grain canisters are upended! And the tribbles are growing quite large... .

So the Klingons veer off and Spock theorizes that by disabling the cargo ship they are making the Enterprise expend valuable power by towing it. Kirk asks for options and Spock replies,


"We could always throw tribbles at them."

Kirk is shocked- did Spock just make a joke?- but no, he's for real. Kirk summons Jones and has it out with him about the immense tribbles all over the ship. Even the glommer can't keep up. Kirk says his security men can't even find all the tribbles, and Jones suggests he get better security men. You know the humor in this one is on point, this is the best (and funniest) episode so far by a mile. But then tribbles are always good fodder. Oh and Kirk can't sit in his captain's chair because tribbles keep getting in it? He keeps pushing them out until finally there's one too big to move. The Klingons meanwhile are back again and want Jones- badly.

So the Klingons are ready to board the Enterprise but Kirk and Spock have a plan- they beam the huge tribbles aboard the Klingon ship, which seems to even things up. Kirk and the Klingon captain work something out- it turns out the Klingons want the glommer, not Jones. The glommer is a genetic construct they engineered to be a tribble predator, since one of their planets is being overrun by tribbles. Kirk is only too happy to beam the thing over, and problem solved. And Spock remarks that

"Tribbles appear to be a much more effective weapon"

Hard to disagree. Aboard the Klingon ship Captain Koloth sets his glommer on the tribbles, but faced with an enormous tribble bigger than a man the glommer flees. An enraged Koloth orders his man to shoot the tribble, which causes it to break down into... many tribbles. As McCoy has deduced that while Jones engineered the tribbles to not reproduce, he didn't slow down their metabolism, and they just get bigger, essentially becoming colonies. As Koloth discovered. Needless to say, Koloth (who has encountered Kirk before) is not happy.
So this one was actually a riot. Easily the most fun episode yet. The humor was surprisingly good and tribbles are quite entertaining! I'll give this one 4 stars.