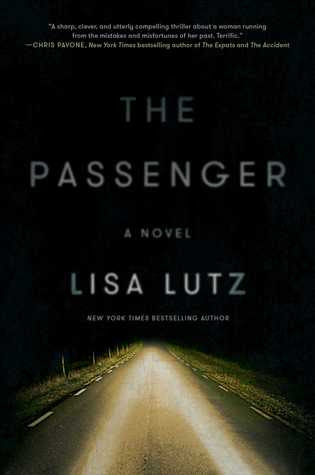 The Passenger is an interesting book. We start off with Tanya leaving town after the death of her husband- it seems he fell down the steps. Tanya doesn't have an alibi and isn't sure she won't be charged, so she leaves. Oh and Tanya is not really her name either. She was someone else before she was Tanya- and over the course of the book she will assume several different identities as she runs from her past. It turns out that Tanya has a dark past wholly unrelated to her current circumstance- and with the help of a shadowy benefactor she makes a new start.

It's never really that easy though and it's not long before her past threatens to catch up to her. Tanya likes her bourbon and in a bar somewhere she meets Blue, a bartender with a past of her own. Her and Tanya become friends and soon Tanya is caught up in Blue's sordid past as well. Things from there escalate and we follow along for the ride as Tanya tries on new identities and tries to stay alive as well.

I have mixed feelings about this book, it's entertaining enough and has some nice twists and turns, but at the same time I often felt like I was reading the same thing over and over- Tanya (or whoever she is at the moment) keeps moving on, trying to stay ahead of trouble, and becoming more and more hardened all the time. I didn't find her particularly likable until the end when we see the bigger picture and understand just what she has been through. This is one of those books where it's almost twisty for the sake of being twisty- the whole object of it is to keep you guessing because of course you don't have enough information. I like books like that though, and this one kept me reading, it's just missing something

Some things also didn't ring true, just a few things that didn't really add up for me. It's a good thriller with a few shocking moments, some nice surprises. Tanya has a habit of hitting the bar wherever she ends up, and sometimes that's not a good idea.  She does meet someone in one of her stops and that has a big impact on the story- and at the same time her desperation drives her to do things that I didn't really feel sold on. So it was a mixed bag for me.

One thing I really liked was the hints that we get into her past. She maintains a somewhat tenuous connection to someone from way back, and little bits of info are dispensed as the story moves along- not enough to piece it together but hints are there. I always like setups like that- and the epilogue was great , wrapping the story up very nicely. I smiled at the end and even though the ride was uneven for me, it had a great conclusion.