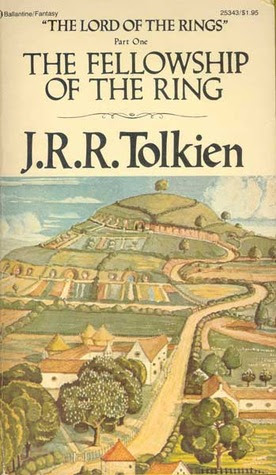 Let's talk favorite moments in books. We all have them- certain scenes, certain moments that are totally awesome, or a great twist that turns the whole story on its head. Character reveals, you name it- the sky's the limit. Today I want to talk about a scene from Fellowship of the Ring by J.R.R. Tolkien. Sam and Frodo are on their way out of the Shire, fleeing the Black Riders, when they come upon elves in the forest. They stay with them for a night and this is their first experience with elves.

'These are High Elves! They spoke the name of Elbereth!' said Frodo in amazement, 'Few of that fairest folk are ever seen in the Shire. Not many now remain in Middle-earth, east of the Great Sea. This is indeed a strange chance!'

'I am Gildor,' answered their leader, the Elf who had first hailed him. 'Gildor Inglorion of the House of Finrod. We are Exiles, and most of our kindred have long ago departed and we too are now only  tarrying here a while, ere we return over the Great Sea. But some of our kinsfolk dwell still in peace in Rivendell.

I'll be honest, the first time I read The Lord of the Rings as a kid I was not very interested in the Shire stuff. I was bored actually... talk about farmers and which hobbit family lives where, and elves in the woods... I was like get on with it. Probably the second or third time too- but as an adult I actually like that part of the story now, because I appreciate the Shire and what it represents. The pastoral nature of it, a sense of innocence that will soon be lost- I find myself actually preferring this part of the story, before we get into chases and orcs and all that. It's not just the Shire either- the Old Forest, Tom Bombadil as a nature spirit, the desolate landscape that used to be the thriving North kingdom of the Dunedain (Aragorn's people)- it's just fascinating to me. But my pick for a favorite moment would be Sam and Frodo meeting the elves...
Posted by Greg at 2:00 AM