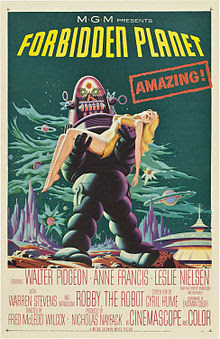 Forbidden Planet is probably my favorite science fiction movie. It was released in 1956 and tells the story of a starship crew in the 23rd century who are sent to the distant world Altair-4 to reestablish contact with a crew that was marooned there years ago. Upon arrival they discoer there are only two survivors- the enigmatic Dr. Morbius and his daughter Altaira. The rest of the crew died years ago- under somewhat mysterious circumstances. Dr. Morbius doesn't seem very happy to see his rescuers however- turns out he has built a comfortable life on Altiar-4, spending his time studying the artifacts of the Krell, an ancient civilization that once called this planet home.

Commander Adams (played by a young Leslie Nielsen) is conflicted by Dr. Morbius' refusal to cooperate Complicating matters is the mutual attraction between Adams and Morbius' daughter Altaira. Adams' orders are to return any survivors to Earth, but Morbius refuses to leave. He feels he cannot leace his research, and as Adams discovers the true nature of the Krell technology, he realizes it is more than one man can hope to study. Morbius disagrees, and it soon becomes clear that they are not alone on this planet. Someone... or something... else is also there, something that kills but cannot be seen. And they may not make it off the planet alive...

My favorite part of the movie is the scene where Morbius takes Adams and his men down into the heart of the abandoned Krell machinery, and Adams realizes the true scale. Machinery so advanced it can turn the users' thoughts into reality... but with power so great, where does one draw the line?

Forbidden Planet is a phenomenal vintage science fiction movie. It's got thrills, a fw chills, and even a little humor. Perhaps best known for introducing the iconic Robby the Robot to the popular culture, it is an entertaining film and a great way to spend an hour and a half if you want to see one of the most influential sc ifi films ever made.
Posted by Greg at 7:23 AM