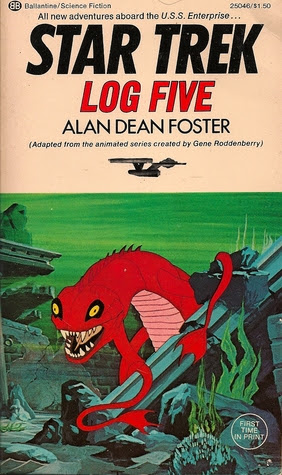 Star Trek Log Five  is a novelization of three episodes of the animated series. The Log series was written by Alan Dean Foster and these stories continued the adventures of the original Enterprise crew. The three stories in this volume are a mixed bag. The first, called The Ambergris Element, involves the Enterprise being sent to a water world to investigate seismic anomalies there. Kirk and Spock lead a small group to survey the planet, and are attacked by a monstrous sea creature in the process. They are separated from the group and when they are found, everyone is shocked to discover that Kirk and Spock have been surgically altered- to breathe underwater!

It turns out that Argo is home to an aquatic race and they altered the humans in order to save their lives. Kirk and Spock must find a way to restore themselves, and to do so they will need to enlist the help of Aquan dissidents and retrieve the venom of the creature that attacked them. Not an easy task...

This story was okay, I was interested in the underwater city but there's not much character depth here. A pretty by the numbers story, for the most part. The second tale, Pirates of Orion, was a much better story, short and taut and with more character development. This felt like a true Star Trek episode, with a crisis that must be averted and time running out. Spinning out of the events of the previous story, Spock contracts a disease fatal to Vulcans- and Kirk must obtain a rare drug that is his only hope of survival. But when pirates steal the drug from a freighter rendezvousing with the Enterprise, Kirk must act quickly to get it back and save Spock's life.

The third story was not good at all and I found myself skimming it just to be done. So on balance, even though this is a nice way to refamiliarize oneself with the original crew, there's not a lot here that is compelling. I read this as a kid and picked it up very cheap on Ebay, curious to see how it would hold up, and I was mostly disappointed, although again the middle story is not a bad read. Recommended for anyone curious about the show or a die hard Trekkie, but otherwise I would say pass on it if you're looking for a good Trek read.
Posted by Greg at 4:45 AM