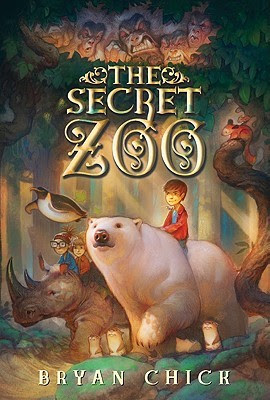 The Secret Zoo is the first in a middle grade series by Bryan Chick. It tells the story of 4 children who discover there is more to their local zoo than meets the eye. Megan is in her treefort one night and sees monkeys on the roofs of surrounding homes. She tells her brother Noah but he doesn't believe her. Shortly after this she disappears. Her brother Noah and their friends Ella and Richie are determined to find her. Their search is fruitless until one night a bird arrives at Noah’s window- a bird with a message. The message tells Noah to go to the zoo where he will find more clues. Once there he receives another message- this time a page from Megan’s journal.

It appears that Megan was investigating some odd occurrences at the zoo. Noah receives several pages from her journal, all from different animals, and he begins to realize this zoo is more than it appears. As the kids investigate the zoo they see some strange goings-on. They have an encounter with a polar bear named Blizzard and continue to receive clues as to Megan's disappearance. The animals seem to watch them and before long they run afoul of zoo security, who waste no time in evicting them.

They soon find there’s another world and a secret society and a wondrous place called the City of Species where humans and animals live together in harmony. The City of is a neat place. The descriptions are lush and whimsical, and the author really lets his imagination run wild here (pardon the pun). I particularly liked the , an immense aviary in the City that holds a multitude of birds of all kinds. The kids flee into the and there is a running battle of sorts as the kids and their animal friends Blizzard, Podgy the penguin and a bunch of prairie dogs try to escape a band of overzealous police- monkeys. One of the better sequences in the book.

I enjoyed the first two thirds of the book a great deal, however after everything is explained at the City of Species I started to lose interest. The backstory and the villain were just not compelling for me. There is a battle at the end with mild violence, and some of the later events strain credulity even in a book this whimsical. But overall it's fun and lighthearted.

There’s no shortage of imagination in The Secret Zoo. The book is charming and whimsical, and it reads fast. There’s a lot of humor as well, and the animals who help the kids are adorable. Who wouldn’t want a ferocious polar bear friend? The Secret Zoo is the first in a series. I don't feel compelled to rush out and get the second one, but I may continue with the series at some point. This one is self- contained enough that you can enjoy it as is. It's a great middle grade book.
Posted by Greg at 9:10 AM