What Happens At Christmas 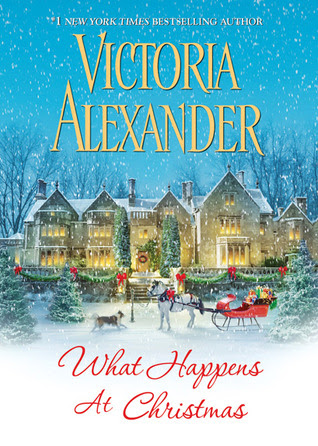 What Happens At Christmas was a delight to read. It's the story of a widowed woman of means, who decides she wants to marry a prince of a tiny country in Europe. She's sure he will propose over the holidays, if only she can show him a proper English Christmas- to do so she hires a troupe of actors to portray her family, as most of them are out of the country, and she doesn't consider them very proper anyway. Her sister Beryl thinks this is a very bad idea, but Camille is determined and the plan goes forward.

The actors are brought in to portray not only Camille's mother and younger sister, but the servants as well. Things get a little more complicated when grayson Elliott shows up- the long lost love of Camille's life. They had been inseparable friends growing up, and on the eve of her marriage to an older man, Grayson had professed his love for her. Camille had not reacted well and Grayson had left, and they haven't seen each other for eleven years. Camille has been widowed in the meantime, and now thinks she wants to marry Nikolai the prince- but when grayson arrives, having acquired his fortune in the intervening years, old wounds are reopened and long dormant feelings are reawakened.

Grayson still loves Camille, and when he realizes the the game that is afoot, he resolves to help in order to earn her trust, and ultimately, her heart- but he has no intention of letting her marry Nikolai. Let the games begin! I don't normally read romances, but this has a romantic comedy feel to it- a comedy of errors that I couldn't stop reading. Camille tries to keep everything running smoothly, managing a troupe of actors while at the same time entertaining Nikolai and trying to figure out what Grayson is up to. Grayson suspects something is not right with the prince, and with Beryl's help he tries to protect Camille while at the same time thwarting her plan. I was laughing throughout the book as events went from one comedic turn to another.

The fun really picks up when Camille's real family shows up and chooses to play roles in the charade as well. An absolute hoot. It does get a bit unrealistic as it goes, as everyone is keeping secrets, and a few times I thought these people just need to talk and get it all out. Wouldn't have been nearly as fun though! This is a masterful story with sparkling dialogue and wry asides, and twists and turns that come at just the right time to keep things interesting. The repartee and dialogue are an absolute highlight, it all flows so smoothly. There is a theme of redemption that runs through all the zaniness, of regrets, longing and atoning for past mistakes- in short, can one have a second chance at love?

I wasn't sure if I would like this book, and was I pleasantly surprised! The dialogue is a joy to read, and it was so fun. A perfect Christmas treat.
Posted by Greg at 4:32 PM