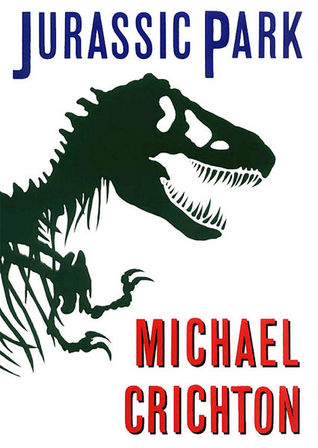 Jurassic Park by Michael Crichton is a story of technology run amok. A wealthy man hires a team of scientists to clone dinosaurs and creates a park to display them. Of course things go wrong... very wrong. I've seen the movie (and the sequel) several times but never read the book- after seeing a recent review on another blog I decided to take the plunge. I'm glad I did.

The book starts out laying the groundwork and we meet all the players. Right off the bat the book differs from the movie, with a lot of more detail and nuance. At the same time the main characters- Alan Grant, Ellie Sattler and Ian Malcolm- seem very similar to the movie versions, right down to the dialogue. You can really tell that Michael Crichton wrote the screenplay as well as the book. Ian Malcolm in particular- he was totally Jeff Goldblum to me as I was reading.

The park is located on an island off the coast of Costa Rica, and the owner and developer John Hammond is forced by the attorneys representing the investors to send Grant, Ellie and Malcolm there to check it out for safety. The problems start out fairly early and soon the entire island descends into chaos as systems fail and dinosaurs escape from their enclosures. I was struck by how the entire book is basically an ongoing crisis- the characters are thrust into all kinds of predicaments, from going over waterfalls to, at one point, fighting a pack of velociraptors with a rocket launcher! There a re a lot of things that happen that are not in the movie- so if you're a casual fan of the franchise the book is not necessarily required reading, but if you're a big fan the book might really be for you. There's a lot of suspense right from the beginning, and Crichton masterfully ratchets up the tension and reveals new details.

Overall this was a fun read, I wanted to keep going and it was hard to stop because the crisis just keeps getting worse. I was starting to wonder if anyone was going to survive.