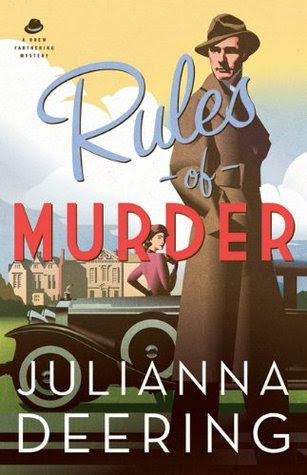 Rules of Murder by Julianna Deering is a 1930's country house mystery. Drew Farthering is the heir to Farthering Place, a sprawling manor in the English countryside. Drew and his friend Nick, the son of the butler, live a luxurious life at Farthering- but it’s about to get more complicated. Drew comes home one night to find guests at the house- including a particularly unwelcome guest named David Lincoln. Rumors abound that his mother Constance and Lincoln had an affair in . also happens to be in business with Drew’s stepfather Mason.

Mason has a niece in named Meredith who is coming for a visit. Meredith soon arrives with two friends and she and Drew hit it off immediately. The Fartherings throw lavish parties, and Drew and Meredith are getting to know each other when the unthinkable occurs- a murder on the property. It seems that during the fireworks more than just merrymaking was going on.

No sooner does everyone react to this shock than another murder occurs- or is it murder?  The mystery deepens and family secrets begin to reveal themselves. When it is time for the girls to leave for their holiday tour, Meredith decides to stay behind and help solve the mystery. Meredith is witty and well- educated, and she shares a love of mystery novels with Drew and Nick.  They decide to tackle the case themselves and put their amateur skills to the test.

Drew plays a cat-and-mouse game with both the killer and the chief inspector, as he and Madeline pursue leads and attempt to solve the mystery on their own. There are twists and turns and red herrings, and Drew soon finds that all is not as it seems, and he doesn’t know who he can trust. Loyalties are tested and secrets are revealed, and no one may be safe from the killer who is still out there.

This is a good story and I enjoyed it a great deal. There are literary references throughout as Drew, Meredith and Nick compare notes and contrast the case with the stories they’ve read. The romance between Drew and Meredith is charming but feels rushed. Drew is portrayed as attractive and of course he’s rich, but Madeline seems to fall for him too fast. The dialogue between the two of them seems forced at times, not realistic

I also feel that Meredith doesn’t have enough to do here. The blurb says Meredith is “whip-smart”, and she is, but this is mainly Drew’s show and she is sidelined too often. I would have liked her to take a more active role in the investigation. I had the impression they were going to tackle the mystery in a more equal way, and was rather disappointed by that. I was also a little put off by Drew’s treatment of her at times. He calls her “darling” throughout and talks rather condescendingly to her at times, and while that may be realistic for the time and setting, I found it a bit jarring.

In spite of these flaws I did enjoy this story and look forward to future installments. The world of Farthering Place was fun to explore. The little details of life at the manor- teatime, changing for dinner, parlors and libraries, were interesting.

As a side note this book is published by Bethany House, a Christian publisher and there are some religious elements present, but they are small and do not overpower the story. I thought it added a nice touch to the story.

"She is pretty," Madeline admitted. "Well, prettyish. In an obvious sort of way."
"That may be so, and she certainly can cook."
"Yes," Madeline drawled, "I bet she can."

She held out one hand, gloved in a leopard print, and Drew bowed dutifully over it.
"Miss Brower, it's been a revelation."
Muriel smirked and flounced down the stairs, swaying her hips. Drew gazed heavenward.