Review: The Land That Time Forgot

This time I'm looking at The Land That Time Forgot by Edgar Rice Burroughs. I saw this edition at my local Barnes & Noble and remembered reading these stories when I was a kid. I didn't remember much of the story so I thought I would give them a try and see how they come across all these years later. See my thoughts below. One note- this volume contains the titular story as well as sequels The People That Time Forgot and Out of Time's Abyss. I have not read either of those yet. 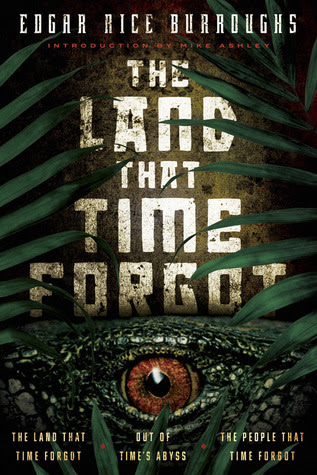 World War I, dinosaurs and cavemen… oh my. The Land that Time Forgot is a tale by Edgar Rice Burroughs, the celebrated author of the Tarzan and John Carter of Mars novels, among many others. The story was written in 1917 and serialized in pulp magazines, as many of his stories were. This book was still in print when I read it as a kid, and can still be found in various commemorative editions such as this one. Burroughs' popularity over the years cannot be denied.

This is the story of Bowen Tyler, an American who volunteers for the ambulance service in in World War I. He is on his way across the when his ship is sunk by a German U-boat. however survives, along with a woman named Lys La Rue. They are rescued by an English boat and are soon back on course for however the U- boat reappears and takes Tyler and the English crew captive.

The U- boat makes for but T and the other prisoners soon find a way to take over the sub. The sub changes hands a couple times and before long they’re in the south Pacific, hopelessly off course and low on supplies. They come across a great island  called Caprona, with high, impenetrable cliffs that conceal an inner world of prehistoric danger. The idea of an island like this existing in the Pacific beggars the imagination, but then again this was written in 1917 and so perhaps was more plausible then.

By now they are nearly out of fuel and are effectively stuck They explore a warm inland sea teeming with prehistoric life, encounter dinosaurs and even catch glimpses of man- like beings watching them from the shore. They eventually make a camp and begin to explore the land of terror they have been thrust into. They soon encounter the tribes of primitive man who dwell here as well. The German and English crews declare a truce so they can work together for common survival. Will they survive long enough to find a way to return to the world they know?

Burroughs is at his best when describing the lush plant life, the nightmare creatures from a bygone age. This is one of the original "lost world" stories. Unfortunately it was hard for me to like this story at times. The first third of the book is about the voyage and struggle for control of the submarine. This was meant to be thrilling I’m sure, but I kept thinking yeah yeah let’s just get to the dinosaur island. You can safely skip the first 50 pages or so and pick up where they’re at Caprona and not miss much.

makes several questionable decisions early on, trusting members of the crew he hardly knows with way too much responsibility. This nearly results in disaster. At another point after rescuing from cave people he goes hunting with them and promptly gets lost. He almost gets captured again by another tribe, manages to stay free but then falls asleep and promptly gets trussed up. I couldn’t help thinking dumbest guy ever?

This all fits the Burroughs formula though. His novels are known for their episodic nature- invariably the love interest is kidnapped and the hero must fight through impossible odds to win her back. This often happens multiple times in the same series. It’s all great fun if you’re in the mood for a quick, breezy read and old fashioned adventure.

Burroughs writes interestingly about love. As is the case in many of his stories, pines for throughout the first third of the story, having of course decided he loved her almost on sight, with the usual misunderstandings that cause her to turn up her nose at him when in reality she loves him too. Insta- love before it was trendy. Here the romance is handled less gracefully than in many other of his tales, even by Burroughs’ standards. It really felt rushed and there is not a lot of depth there.

Unfortunately there are also several instances where it is clear this was written in an earlier time. Racism and the like were not unknown in the pulps of the era. There are elements here that are not politically correct by today’s standards, and while it’s not the worst example of this I’ve seen, it can be jarring to modern readers.

I grew up reading Burroughs and loved his books as a kid. Some are better than others, of course- the John Carter series remains my favorite of all his works. This story unfortunately does not match that standard. I will always be grateful to Burroughs though for his imagination, and for the tales of wonder he provided. He blazed a trail that many have followed, and for that he deserves recognition.