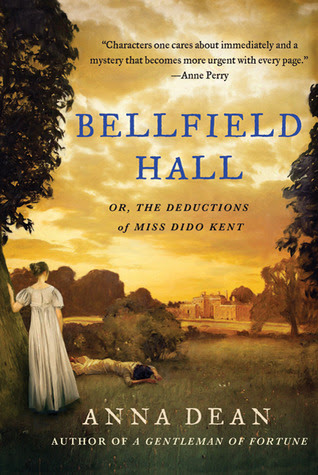 Bellfield Hall is a mystery set in the Regency period of . Dido Kent, an unmarried woman (or spinster, as they say) has been called to Bellfield Hall, the sprawling country estate of the Montague family, by her niece Catherine, who is engaged to the Montague heir Richard. It seems that on the night of a ball celebrating their engagement, Richard mysteriously called the engagement off and disappeared. As if that’s not enough, a body of a young woman was found in the shrubbery outside the manor. Catherine wants Dido to get to the bottom of Richard’s disappearance.

The story starts out with Dido writing a letter to her sister, and sets the stage by introducing all the players. Sir Edgar and Lady Montague are of course scandalized by the murder on their property. Mr. Harris, who made his fortune in India, and his gossipy wife  have two daughters who are, as they say, very eligible but approaching the age at which their prospects might start to dim. They are being courted by Colonel Walborough, a ponderous man with perhaps some secrets of his own, and Tom Lomax, a cad with a gambling debt problem. Then we have Mr. William Lomax, the father of Tom and the man who runs the business of the estate. It is this latter worthy that catches the eye of Dido- for he is an older gentleman, widowed and apparently a man of quality.

Rounding out our cast is Catherine herself, the jilted fiancée, who has not known the missing Richard Montague very long but is very devoted to him, and Dido’s waspish sister-in-law Margaret. Dido soon discovers there are a lot of questions surrounding the engagement ball. Why did Richard Montague disappear so abruptly? What do Sir Edgar and Lady Montague know that they are not telling? And what will Dido do when she finds herself perhaps drawn into an affair of the heart?

Throughout the story Dido writes letters to her sister in which she details her latest deductions. This serves the purpose of tying together the various clues and spelling things out for the reader. The mystery has some twists and turns, and it’s one of those stories where you can’t really guess the ending (or the identity of the murderer) because you don’t have enough information yet. The eventual reveal strains credulity just a bit, but then again in a time and place such as this, with family secrets and reputations on the line, who is to say what lengths people would go to?

Dido, who thinks she has long since left romance behind, is surprised to find herself attracted to Mr. William Lomax. They share a compatible intellect and a distaste for the shallow games of the drawing room. This was a nice touch, I felt for Dido as she navigated both the hidden secrets of the manor house and her own reawakened emotions.

I liked this story, although I thought the beginning was a little confusing. The initial letter Dido writes references all the players and it was hard at first, at least for me, to know who everyone was. It takes a little time to get to know them all and once you do, you find that some of them are not as they seem. I thought the beginning could have been more reader friendly. I enjoyed the period details sprinkled throughout, the glimpses of luxury- mentions of a Greek temple on the grounds, the peacock making its way across the gravel pathways. This is a finely written story with a lot to offer those interested in Regency era mysteries.

This is first in a series- the second book is A Gentleman of Fortune.

"However, I was obliged to abandon this intriguing idea when I discovered that her maid was with her all the time and the footman visited her repeatedly to take, at different times, logs for her fire, a letter and chocolate".

" 'I do not think it is possible for a man to be handsome, agreeable and rich. I put it down as a kind of law of nature that he will always be lacking in one of those three cardinal virtues.'
Posted by Greg at 9:41 AM