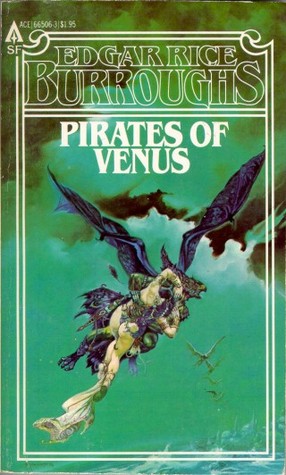 Pirates of Venus is such an interesting read. It's a product of its time, having been written in 1932, and there are a lot of things happening here that I didn't catch when I was younger, having read this as a teen. Carson Napier is a guy wanting to travel to Mars but due to some miscalculations ends up on Venus. Don't ask, honestly. It's ludicrous even by the standards of the time, I would think, but like a lot of Burroughs stories it's not the point in how he gets there. It's what happens when he does. I mean, if I were to read this again I'd skip the first forty or so pages and just pick up when he's there. The whole thing is a hoot but once he's on Venus it's at least tolerable.

Venus in this series is a world of vast oceans and towering trees, some reaching into the atmosphere. A race called the Vepajans dwell in tree cities and have a sort of paradise, including an immortality serum that confers long life and a relatively egalitarian way of life. They are opposed by Thorists, which I suppose are a thinly veiled analogue for communists of the '30's, and Carson gets embroiled in all manner of shenanigans once he arrives on planet. Not only that, but in true Burroughs fashion he falls immediately in love- seriously, like at first sight, with Duare, the local princess. She of course won't give him the time of day because Venusian princesses don't do that. Just like in the Mars books, there are the usual problems where princesses do not consort with men and so forth.

Carson of course makes an ass of himself on several occasions, and vacillates between wanting to crush her to his bosom and cover her with kisses (yes this was a Burroughs thing) and take a more restrained- you know, civilized- approach. And we have the usual cliffhangers and coincidental occurrences, all of which serve to keep the story moving. Politically correct this is not, at times, but it does have a certain propulsive momentum to it- I mean, the action rarely flags. Having said that, this is not my favorite of the Burroughs stories, but having hardly remembered any of it since reading it years ago, I was anxious to see what it would read like now. The action really picks up about midway through, when we actually get some pirate action. By the end I was mildly engaged and curious to see how Carson was going to get out of his latest fix.

Burroughs is well known for Tarzan and John Carter of Mars, naturally, and Carson is one of his lesser- known creations. This is also a later series and while it hints at so many of his earlier creations, the setting of Venus must have been evocative for its time, even if it's not feasible by today's standards. This is a fun, somewhat ridiculous pulp SF offering by one of the greatest storytellers of the early twentieth century, and realistic or not it's a fun ride. Just skip ahead a bit.