Day of the Giants 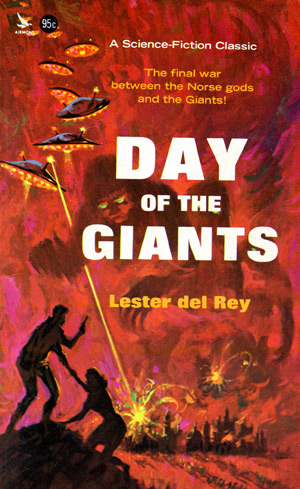 Day of the Giants is a 1959 science fiction novel written by Lester del Rey, perhaps best known for the del Rey imprint at Ballantine Books, named after him. He was a prolific SF writer as well as an editor, and my familiarity with him was mainly for Tunnel Through Time, one of my favorite books as a kid. I mean, dinosaurs and time travel, right? What's not to like? I also had this book but I hardly remembered it when I picked it up again recently. That tagline though- war between Norse gods and giants- is enough to rope me in. Not to mention the cover, with its post apocalyptic feel and flying saucers. Wait- flying saucers? There are no flying saucers in this story, so I guess we have a little artistic license being taken with the cover.

So what is it about? Well, in short it's the tale of a normal guy who gets embroiled in Ragnarok, the twilight of the gods and the apocalypse of Norse myth. Leif Svensen (what a name) is taken to Asgard after being nearly killed by vigilantes and once there he begins to apply modern technology to the problem of Ragnarok. Namely, the gods of Asgard are seriously outnumbered by the giants who will soon be knocking on their door. Along with that we have the obligatory love story with Leif falling for the shield maiden Fulla- falling very quickly, I might add. This was the 50's, instalove was not exactly unheard of in stories like these, and to be fair she is a shield maiden. I thought Fulla's portrayal was very much of the times, this being a pretty old fashioned romance- I mean she purrs and coos at various times (honestly), but at the same time she armors up and rides a winged horse into battle, so she's no wilting flower.

Anyway Leif is pressed into service with the dwarves, creating modern day weapons to combat the giants, and we also have some intrigue with the Norse gods, some of whom are not happy at Leif's presence. We also have a foray into Jotunheim, the land of the giants, which was kind of delightfully wacky. I will say that del Rey isn't shy about throwing the mythological setting fully into the story- I feel like a student of Norse mythology might catch everything but a casual reader might be somewhat lost. It didn't really take me out of the story, though. If anything, I thought some descriptions were a little sparse, especially Asgard. I never felt like I got a sense of the grandeur and size of the realm.

This is a short book at roughly 128 pages and it was gripping enough, especially the action- packed Jotunheim sequence, but I did get a little bored throughout the middle. The writing is kind of dry and I never felt anyone got developed much personality-wise. Maybe the standout character is Loki, who's every bit as canny and shifty as you would expect, but he's also on the side of the good guys here, and steals most of the scenes he's in. He also appears early on, hitchhiking with Leif as he's driving through a snowstorm, and introduces himself as Laufeyson. Like I said, the myth references are spot on.

Thor is here too in all his bluff glory, and the early scenes of the book are perhaps the most chilling, as we see Fimbulwinter (the prequel to Ragnarok, I guess) descending on Earth, and people descending into savagery to survive, including Leif's neighbors. I'm glad I read this and in spite of the dated nature of it, it's not a bad way to spend an evening.