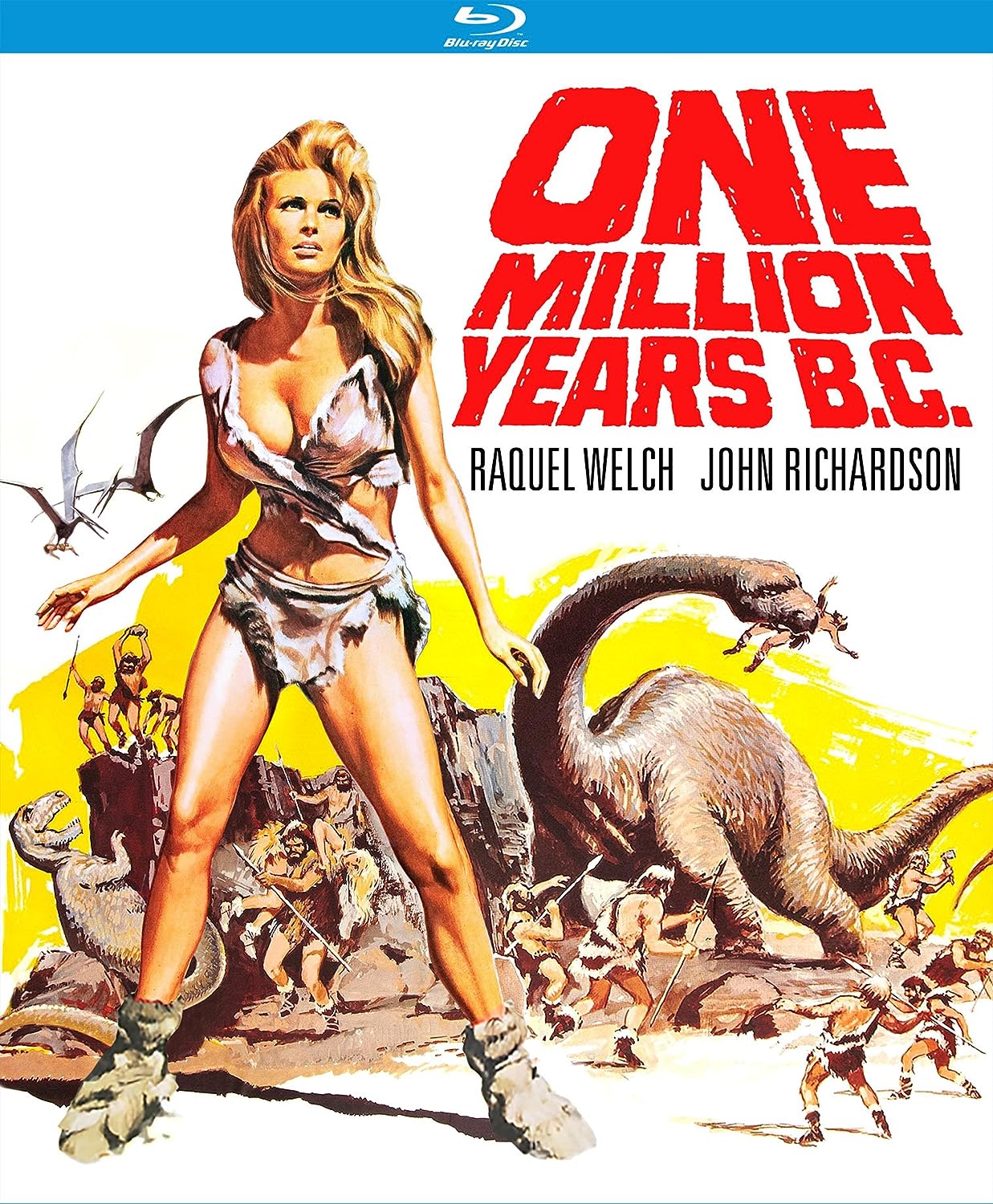 One Million Years BC! Why didn't I think of this one sooner? This movie is best known of course for Raquel Welch as a cavewoman, but the stop-motion animation of Ray Harryhausen is a highlight as well. This is one of my favorite films of his, actually. Although I think nostalgia clearly plays a role- I mean it's not like it's great or anything. But... it's fun? So let's see what we have.

We start off with a pretty impressive, old school introduction- the world is new, lots of lava flowing and all that. And this voiceover- accompanied as it is by a bunch of scraggly cave dudes hunting a boar.
A young world. A world early in the morning of time. A hard, unfriendly world. Creatures who sit and wait. Creatures who must kill to live. And man. Superior to the creatures only in his cunning. There are not many men yet- just a few tribes scattered across the wilderness. Never venturing far, unaware that other tribes exist even. Too busy with their own lives to be curious, too frightened of the unknown to wander. Their laws are simple- the strong take everything.

This is Akoba, leader of the Rock tribe. And these are his sons- Sakana and Tumac. There is no love lost between them. And that is our story.

Pretty good beginning. Tumac and Sakana are already fighting so that was no exaggeration. They've caught a boar and Tumac killed it, but oh dear- as they carry their prize away, one of the older members of the tribe falls in the pit. Does anyone jump in and help him? Fuck no! They just leave while he cries for help, and eventually the vulture we saw earlier goes in for a meal.

So it's nighttime now and the hunters are returning with their spoils. Tumac is greeted by his lover Nupondi the Wild One and pretty soon we're having a feast of roast boar. Everyone is hungry and while they're waiting for it to cook, a rather hapless youngster tries to get a piece, but Akoba isn't having any of that. He steps on the youngsters' hand, burning him, and it's clear that Akoba gets first pick. When his mate indicates that it's ready, he tears off a haunch and scurries away to eat it, and now it's everyone's turn. Tumac and Sakana each tear off a haunch of course before anyone else.

It's a free for all. And clearly they're not living in the most stable environment as rocks fall and there's volcanic rumbling going on. Akoba wipes the grease from the boar off on his chest and decides he's still hungry, so he goes and grabs Tumac's portion. Tumac takes a dim view of that, and they fight. Poor Tumac gets his ass beat and knocked off the cliff (they live high up), and I guess that's that. To add insult to injury, Sakana decides that Nupondi is his now, and we see her trying to fight him off.

Tumac wakes up in some shrubbery and takes stock of his surroundings. Apparently climbing back up to the caves is not an option, so with a last look back he sets out on his own. Cue the melancholy music. Later he looks back and spits in the general direction of his former home, and climbs some mountains. There he encounters a giant iguana (seriously) and then finds himself in some spooky cave with a shambling ape-man of some sort, and a bunch of skulls. Ooh cannibals or man- eaters? He hightails it out of there and comes out into some volcanic wasteland- dude's lost.

Meanwhile back at the caves Nupondi wakes up in the middle of the night and sneaks over to steal the boar horn from Akoba. Huh? Maybe it's a sentimental thing since Akoba had given it to Tumac, before their falling -out. Akoba catches her and who knows what he's going to do, but Sakana wakes up and it's a standoff. Akoba relents and lets her have it. Those two are going to have issues, I think. Tumac wakes up and finds the sea after stumbling through a sandy wasteland.

We now meet the Shell people. They're blond and happy and Tumac wakes up (he passed out just steps from the water) just in time for a giant turtle to show up and attack. Loana (played by Raquel Welch) blows on her shell horn to summon help, and the men of the Shell people soon arrive to help. Loana pulls Tumac to safety, and while the men fight the turtle, Loana actually gets jealous with one of the other women tending Tumac and waves her away. Um, they just met??

The turtle eventually goes out to sea and the Shell people take Tumac back to their caves. They live a lot nicer than the Rock tribe though, and they even have cave paintings. Plus they fish and stuff- much better than brawling over roast boar. Speaking of the Rock tribe, they're out hunting again and this time Akoba screws up. Climbing up after a ram they're trying to catch, he finds himself hanging precariously, and Sakana sees an opportunity. Instead of helping his father, he kicks loose the rock Akoba was hanging onto, plunging him to his death. Sakana runs the Rock tribe now.

Tumac wakes up and Loana brings him some food, but he eats like a savage and the children of the tribe laugh at him. Good grief, man, slow down. I think we have a love triangle developing here. Ahot, the blond spearman who seems to have a thing for Loana, watches uneasily as Loana seems totally smitten with Tumac (and beats the shit out of me why). Meanwhile, at the Rock tribe, we have some kind of tribal dance going on, and who shows up? Akoba! He's still alive, although not looking too good. Guess he's tough to kill.

Loana meanwhile is showing Tumac around the Shell people camp and teaching him spear fishing, among other things. An Allosaurus attacks and Tumac manages to kill it with a spear, saving a young girl trapped in a tree in the process. He's a hero, right? Well, not really. He immediately tries to steal Ahot's spear, and they have a pretty good fight. Tumac gets kicked out, and Loana inexplicably leaves with him. What do you see in him, girl? From what I've seen so far Tumac is pretty much an asshole.

Back across the sandy wasteland goes Tumac, with the spear that he and Ahot fought over (Ahot gave it to him when he left, as a show of good will- I guess?) and Loana is struggling. He doesn't even really wait for her- what an ass. Clearly he seems to be headed back to the Rock tribe- I guess with his new spear he feels like a new man or whatever. He leads Loana back through the cave of the ape-men, but they have to hide when several of the creatures show up and begin fighting. After hanging out in this mysterious cave all night, they finally manage to escape, only to be trapped by a Ceratosaurus and a Triceratops, who decide to fight. Figures. They get separated by a rockslide, and Loana is fleeing (where is she going?) when she runs straight into... the Rock tribe!

Good old Sakana captures her, but then Tumac shows up and they fight. Tumac has a spear now and he's not afraid to use it, and Sakana gets injured. Tumac is about to kill him when Loana stops him, and they drag the wounded Sakana back with them to the Rock tribe caves. Here's where the fun begins, because remember Nupondi the Wild One? She apparently wants Tumac back, and rushes to bring him the boar tusk (remember that?). She doesn't take kindly to Loana, and this happens.

The killer part for me is where Akoba gives her a rock to, you know, bash her enemy's head in.

So that's settled. Tumac takes the men hunting, I guess, and Akoba's woman shows Loana their collection of animal skulls and stuff. Later they're getting settled into the Rock tribe and Loana introduces them to swimming- apparently the Rock people have never swum, judging from their reactions? Sadly, a pteranodon decides Loana looks yummy.


This is the best part of the show. The pteranodon is carrying Loana back to its young when a Rhamphorynchus attacks, and as they're fighting over Loana she is dropped into the sea. How did they get so close to the sea, when it was implied earlier that Tumac had never even seen the ocean? Oh, well. The shot of her staggering out of the sea, wounded, with offshore islands in the background and the raging surf, is actually pretty powerful. Not to mention when Tumac arrives, just after she collapses behind a dune, and sees the Rhamphoryncus eating the pteranodon young, and assumes it's Loana that's being eaten. He turns away, stunned, as she is merely yards away, her body heaving as she's in shock. The music is really effective here also.

Nupondi is happy though. And Sakana has been busy- while Tumac and the rest are away he has taken the tribe over again. Loana though somehow makes it back to the Shell people, and she must know Tumac is gonna be in trouble, as she requests that Ahot and the others go to this aid. Ahot agrees and a party of Shell people arrive just in time for Tumac and Sakana to throw down.

Total chaos now. Sakana calls out Akoba and ambushes him when he emerges, and some asshole grabs Nupondi and tries to carry her away. That's a bad idea as she bashes his head in with a rock, and then stabs the fuck out of him with a spear. I like her. Sakana grabs Loana (he seems to always want Tumac's women) and tries to flee, but Tumac tackles him and they fight. Tumac is about to kill him when- the volcano erupts. Yes, right then. Everyone runs for their lives, and Tumac finds time to stab Sakana- so that's settled- before everything falls apart. People fall into crevasses and get buried under torrents of rock, that kinda thing. Poor Akoba and his woman get buried. Afterward, everything is sepia- tinged and bleak- the whole landscape has been altered.

Some final thoughts. This was shot in the Canary Islands, and the scenery is nice. The music isn't bad, either, and really gives the movie a certain feel. Martine Beswick, who plays Nupondi, was a Bond girl- she was in both From Russia With Love and Thunderball- and there's a nice interview with her on the Blu-ray. All in all, I would say this movie doesn't suck, as long as you're not, you know, expecting too much.
Posted by Greg at 8:02 PM