Movies That Suck: The 7th Voyage of Sinbad 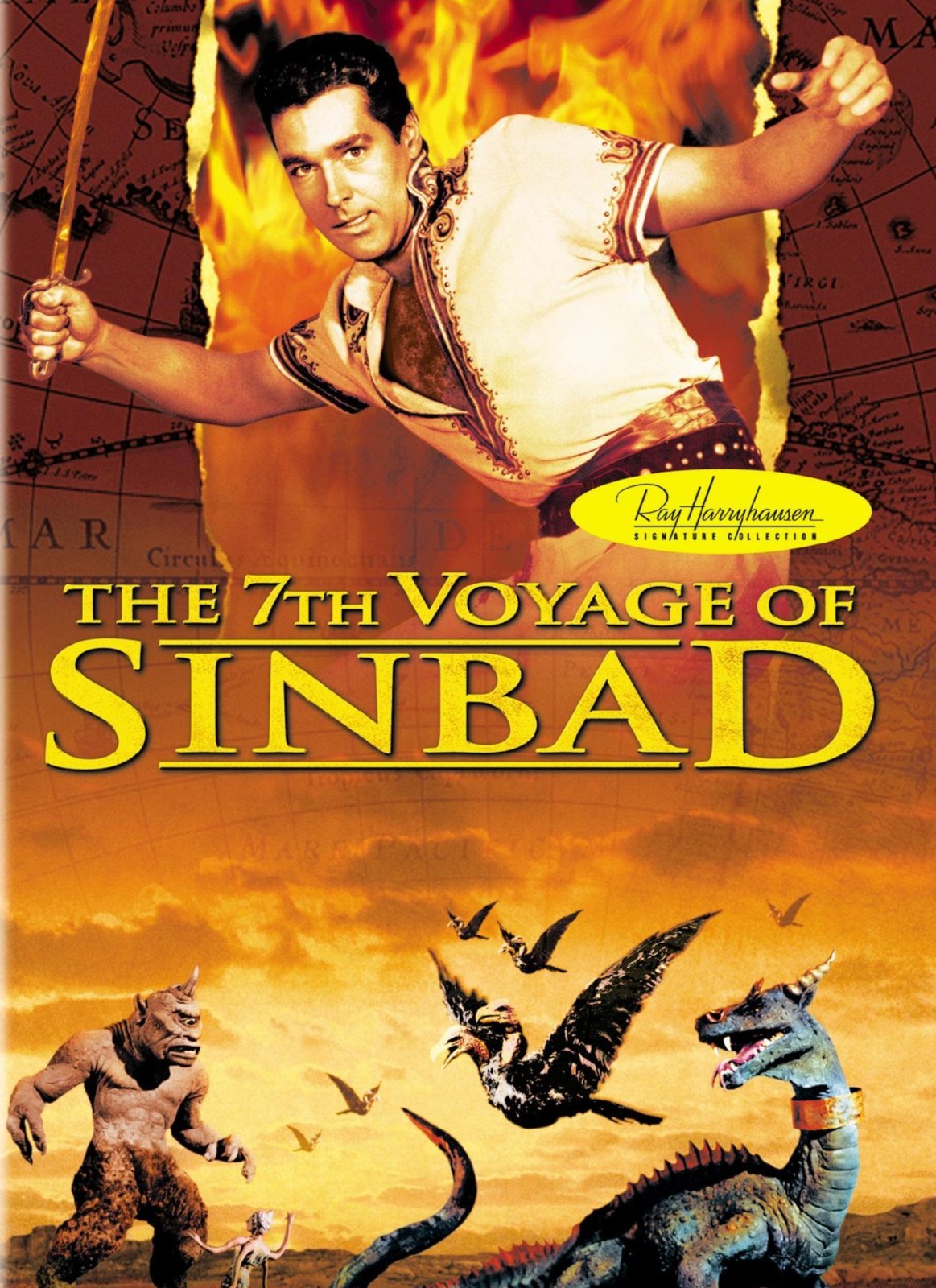 This week is The 7th Voyage of Sinbad! I've never seen any of the Sinbad movies, other than snippets, so this will (mostly) be new to me. I've kind of actually wanted to see these, so it should be a treat.

We start with Sinbad himself at the helm of his ship, and apparently things aren't going well because everyone is hungry, and no land is in sight. We establish right up front though that the captain is a badass, as a crewmember tells one of his fellows who says that any land they find no man would dare set foot on- "Sinbad would. He dares anything." Okay. Sure enough- land ho! Sinbad has the eyes of an owl too, we're told, as he sees land first. This looks like a pretty motley bunch of rogues. You know, for actors.

There's a lady aboard, of course, and she is pretty cozy with Sinbad, to her handmaiden Sadi's distress. It's okay, though, they're due to be married in a week. First they have to get home to Baghdad. The island they've found is lush and will solve their hunger problem, but wait- there's a mysterious stone temple on the island! Of course there is. And of course Sinbad is determined to explore it. But... no, that's not going to happen, because a guy comes running out, followed by a Cyclops that is decidedly not friendly. "To the boats, quickly" yells Sinbad. Yeah I agree.

So the guy is Sokurah and he's, um, a wizard. He has a magic lamp and summons a genie to fight the Cyclops- the genie is a kid and he cartwheels- seriously- to the attack, erecting a barrier so the Cyclops can't get the sailors. Apparently the genie cannot do harm, but he can protect. Sokurah seems like a crafty little bastard, by the way. He's gonna be a lot of trouble, I can see. And he's a little full of himself- as he brags about the genie protecting them, the Cyclops hurls a boulder that swamps their boat, causing the lamp to be lost. Oops!

Sinbad would probably be better off letting Sokurah drown, but he rescues him and they take off. The Cyclops meanwhile reaches into the water and retrieves the lamp- why am I thinking it was originally his?- and Sokurah's shit out of luck. He tries to persuade Sinbad to go back, but no dice- Sinbad has to get to Baghdad, where he is to wed Parisa. The wizard is pissed, but what can he do? He creeps out Parisa, too. I kinda like her- she calls him out on why, if he is so powerful, he didn't just kill the Cyclops? Uh- huh.

Baghdad! This film by the way doesn't waste any time. We're only a little over ten minutes in. The wedding feast happens apace, and hey guess what- Parisa is the daughter of the sultan of Chandra, and her wedding to Sinbad is meant to seal peace between the two countries. Nice. Sokurah tries again to convince Sinbad to return to the island, and is again denied. The caliph of Baghdad does request, however, that he perform at the feast, and Sokurah complies- by turning Sadi into a snake woman. The sultan, by the way, is kind of a droll fellow. When Sokurah has Sadi lower herself into a huge vase, and then throws a snake in, Parisa is horrified- but her father merely wishes mercy on both of them.

So after that the caliph and the sultan ask Sokurah to tell the future, and he predicts war between Baghdad and Chandra. Pretty clearly a ploy to get the caliph to give him a ship, so he can get back to the island Colossa, and Sinbad gets pissed and throws him down after he upsets Parisa. The caliph banishes Sokurah, but later that night the wizard magically shrinks Parisa while she sleeps. Um, where is the security? He just comes to her window? Anyway the next morning she's standing on her pillow, about the size of a Funko Pop. Well, maybe a smidge bigger, but not much. Her dad is pissed and declares war on Baghdad, and Sinbad goes to Sokurah for help. Who plays along and pretends that, well, maybe he can help.

Sinbad's dumb. Anyway the potion required to fix Parisa can only be made with the shell from the egg of a roc. So guess where the rocs are? Yup, Colossa. And I see no indication that either Sinbad or the caliph realize that they've been played. Oh well, this was 1958. Sinbad needs a crew though, so he recruits convicts from the prison yard- condemned men. Yeah, that'll go well. Once at sea the convicts promptly mutiny and take over the ship. Sinbad's like a one man wrecking crew though, he takes out a bunch of dudes but he has to give up when Sokurah is threatened. Can't have Parisa's only hope killed now can we? I like how Sinbad and Sokurah are now bound by circumstance though.

Sokurah curses the baddies though, and sure enough as night falls the keening wail of sirens or something drives the convicts mad. There's a lot of Greek mythology in this. Sinbad tells Sokurah and Harufa, his right hand man, to stop their ears with wax, so they won't go mad. Sound familiar? A sailor finally releases Sinbad and begs him to help them, and somehow our captain gets them back on course and back to Colossa, with help from Sokurah and his navigational prowess. He's turning out to be handy. Weird, too, how this scene ends- one minute they're fighting the storm, and the next they're on Colossa and getting ready to deploy the giant crossbow that Sokurah designed. Whatever I guess.

Sinbad and his men enter the Valley of the Cyclops, along with Sokurah, who insists they split up. Right, keep talking. And in spite of his mistrust, Sinbad agrees. Harufa, meanwhile, follows them, perhaps not trusting Sokurah either? That would be wise. He kinda cracks me up too, like when he finds a huge club, no doubt belonging to the Cyclops, and then looks at his own rather more modest weapon by comparison. Sinbad finds him and together they find the Cyclops' treasure cave, but oh shit! They're captured. The Cyclops throws them in a cage and starts cooking Harufa. Sokurah sees this and looks pleased.

The Cyclops is turning Harufa on his spit when he hears Sokurah clattering around in his treasure cave and goes after him. Sinbad meanwhile is freed when Parisa, in her shrunken state, manages to bust them out of the cage. They rescue poor Harufa and after the Cyclops squishes a few men with a tree trunk, Sinbad manages to blind him with a torch, and then lead him to a cliff where he falls to his doom. Sokurah tries to get his lamp back but Sinbad's like no, not so fast asshole, I'll hang onto this.

So... roc time! They need a roc egg shell fragment, after all. Look at that bigass egg! And there's something moving inside! Two of the sailors, who are hungry, decide to break it open, and out comes a two headed roc baby. Or chick? And they... kill it? Sokurah tells Sinbad he shouldn't have let them do that, to which Sinbad replies "Hungry men don't ask, they take." Really? That's a pretty blase attitude. Anyway they stay around, like idiots, and start roasting the chick, while Parisa goes into the lamp to meet the genie. Turns out his name's Baronni, and he just wants to be free.

She makes a deal with him- if he helps them, they'll help free him. They're gonna need help too, because mama roc has returned and she's not happy. The idiot sailors have part of her chick on a spit, which I imagine is not helping. And in the chaos Sokurah kills Harufa and grabs the princess, while the roc grabs Sinbad and drops him into its nest. And then flies away? Where's it going? Well, regardless, Sinbad still has the lamp, and he summons forth the genie to help him find Parisa. The genie tells him where Sokurah's lair is, and helps him get past a dragon guarding the entrance. Yes, a dragon! A pretty lame one, though.

Sokurah's waiting for Sinbad though, and after restoring Parisa to her normal size, he animates a skeleton to kill Sinbad.

That doesn't really work out though, so Sokurah tries other ways. Parisa summons the genie to help them, and after he does so she throws the lamp into some lava, to keep her promise to him and try and free him. Sokurah is not pleased. Sinbad and Parisa are just about home free, but no! There's another Cyclops! Ack. Sinbad frees the dragon and they of course fight.

Dragon one, Cyclops zero. Sokurah is beyond pissed now, and commands the dragon to follow and kill. He and the dragon chase them all the way to the beach, where the giant crossbow comes in super handy for dragon slaying. Sokurah gets crushed sadly under the dragon as it falls- good riddance to him- but it's not dead yet and chases them a bit more before it finally expires. Why didn't it breathe flame, either with the Cyclops or while chasing them? It did in the cave, when it didn't really matter. Oh, well. They're home free and back at sea, and guess what? Baronni the genie is free, and decides to be Sinbad's cabin boy, as he is no longer bound to the lamp.

And that, my friends, is the 7th voyage of Sinbad.

So did this suck? Well, yeah. I mean it's from 1958 and the special effects are... well, they're special. I mean clearly. But it's entertaining in an old Saturday matinee kind of way- an old school monster flick. It's not meant to be good, really.