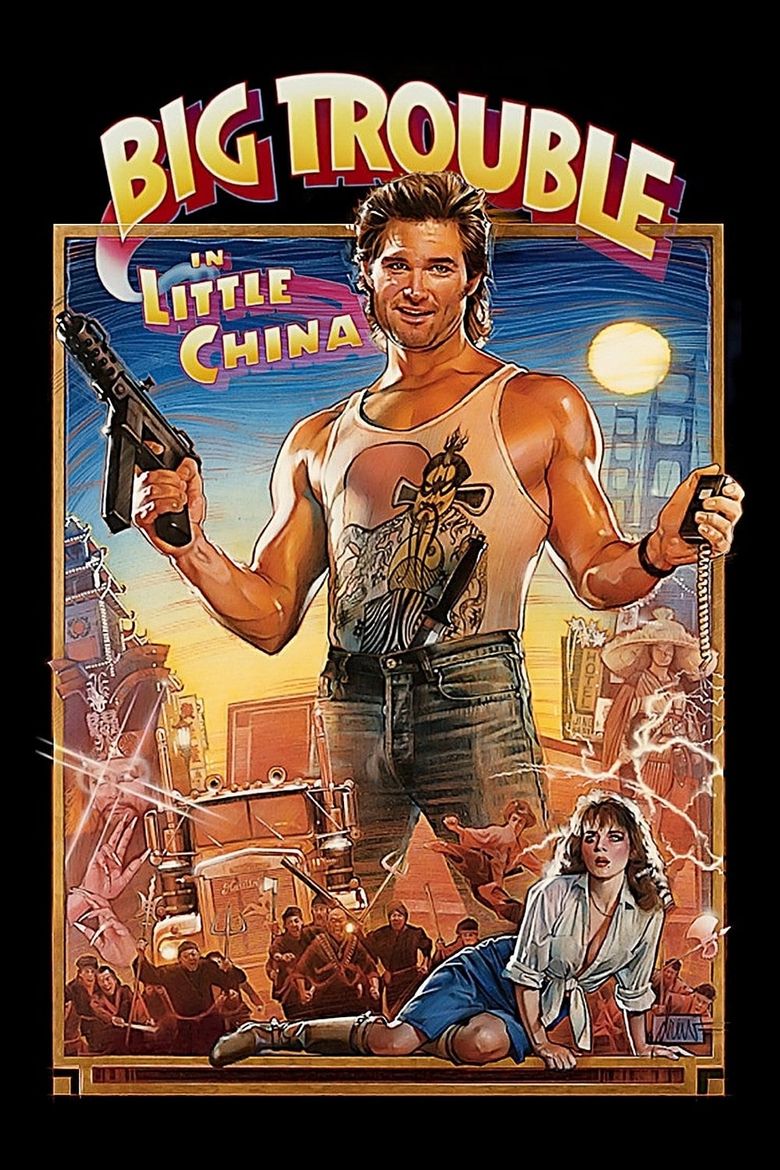 Movies That Suck is a feature where I watch a bad movie and share my reactions to it in real time. Sort of like live tweeting without the tweeting. I watch it so you don't have to! So let's have a look...

This week we're looking at Big Trouble in Little China. This is tailor made for this feature, naturally- I mean we might have to go back to Tremors (sorry Tremors fans) or The Mist to find one this bad. in other words, this feature is back on track with the suckage! Although to be honest, it was already back on track last week with Chernobyl Diaries. Regardless, let's get started.

This is all about Kurt Russell as Jack Burton, a truck driver who gets mixed up with the supernatural in Chinatown. You see, he's friends with a guy named Wang who owes him money. Wang doesn't want to pay though- and oh he's gotta pick up his girlfriend, Miao Yin, from the airport first, so Jack goes with him. At the airport Jack sees Gracie, played by Kim Cattrall (wait, Kim Cattrall's in this?) and thinks she's hot. She shoots him down though, and meanwhile some punks from the Lords of Death (Chinese street gang) abduct Miao Yin. Jack and Wang race back to Chinatown and track them (not sure how) to an alley, where... they witness a fight between two rival gangs, the Ching Sing and the Wing Kong. After they shoot each other up a bit, they decide to have a martial arts fight- one of the worst I've ever seen. This is terrible so far.

Okay no one here can act- especially Wang and Kim Cattrall. And in the middle of the alley fight these three dudes come down from the sky- I guess they're called Thunder, Rain and Lightning. And they use magic. Jack tries to drive away and oops runs over some old guy- Lo Pan- but surprise! Lo Pan is uninjured. He's the big bad see. Light comes out of his, um, eyes and mouth and Jack is blinded. Temporarily, thank goodness. Okay the facial expressions here are killing me- seriously I know this has become a cult classic of sorts, but it's so bad. Anyway Jack and Wang run- right into the Lords of Death guys they were looking for- you know, the ones that took Miao Yin. So they run from them too- but I'm confused, they were looking for these guys- why are they running?

I guess the Lords of Death work for the Wing Kong, and Lo Pan runs it all. Jack and Wang take refuge at the Dragon of the Black Pool restaurant (cool name) and guess who shows up? Gracie! Small world. She knows all about the gangs, including that the Lords of Death are going to sell Miao Yin to some group called the White Tigers. I have no idea where this is going. Oh, and some guy named Eddie Lee shows up. Turns out that Miao Yin is worth extra cause she has green eyes.

"She's got green eyes."
"Oh no. Seriously? That's an extra to these people. It's like leather bucket seats. It's double the price"

Um. So here's the plan. The White Tigers run this brothel where apparently Miao Yin is being held, so Jack goes in there to find her. And there's a reporter named Margo who shows up- she's apparently working with Gracie. I don't know. But wait those three dudes- Thunder, Rain and Lightning- show up, kick Jack's ass, and take Miao Yin. So much for the rescue. Wang's pissed off and wants his girl back, so him and Jack are going to get her. They barge in to the Wing Kong place and are promptly captured and brought before Lo Pan. He explains why he needs Miao Yin- she is to be sacrificed so he can be young again, and some curse on him is lifted. Oh and this guy has been in so many cheesy movies it's not even funny.

So Gracie, Margo and Eddie to the rescue! Except, um, they're captured too. But wait- Jack and Wang free Eddie and escape, and they release a bunch of women prisoners. The martial arts choreography is really bad, by the way. So they escape through some sewers and they all get out- except for Gracie, naturally, who is grabbed by some freakish monster thing. *Sigh* Oh, and Miao Yin still hasn't been rescued. So... if I was her I'd be losing confidence at this point. Meanwhile, back at the restaurant, Jack and Wang are gearing up for... what, a third try? Margo says call the cops (duh), but no... Jack knows better. And Egg (I haven't talked about him yet, he's some dude that has special powers, I don't care) shows up with the Chang Sings (remember them?). I guess they have allies.

Lo Pan helpfully explains to Gracie that he now has two girls with green eyes- her and Miao Yin. One to marry and one to sacrifice? Meanwhile Jack and gang are underneath Chinatown- Egg is leading them on a secret way. This looks like a $5 set- really. I mean, so fake. I gotta wonder at this point, did they intentionally make this bad or were they playing this straight? It's horrible. There's some weirdass mystical ceremony that Gracie and Miao Yin "survive", and Lo Pan declares he will marry both of them. Right. Okay the rescue crew are in Lo Pan's place now, and we get some gibberish about how it is Egg's destiny to defeat Lo Pan or whatever. He's got a magic potion too. And... there's a floating head with a bunch of eyes. I'm glad this is almost over.

Okay on to the wedding. They all drink Egg's magic stuff and crash the wedding, but Jack, doofus that he is, knocks himself out before the big fight. Thankfully Gracie's on the case and kicks a little butt, but then Lo Pan is cutting her with his long nails and drinking her blood (??) - oh wait, that's Miao Yin, sorry. Lot going on. There's a lot of martial arts wire work going on, too- you know, people flying through the air and swordfighting while they're doing it. And I love the neon! They're in an underground chamber but there's neon lighting running all along the walls. Nice.

There's an escalator too. But we'll get there. First, Lo Pan and Egg have a mystical battle, which is a stalemate, then Lo Pan flees with Miao Yin. They cannot seem to rescue her! Jack and Gracie go after her (why don't they wait for Wang and the rest?), and they kiss on the way. You know, and after the kiss, as they confront Lo Pan, Jack has lipstick on his face from the kiss. Now that's a nice touch. Jack faces off with Lo Pan while Wang, who shows up in the nick of time, fights Thunder. And- shocker of shockers- Jack kills Lo Pan! With his knife! After spending the whole movie being a dipshit he's- the hero! Nice. Oh, and Gracie wipes the lipstick off. Wang and Thunder, meanwhile, are fighting, and furniture is flying- was this meant to be funny?- and when Thunder sees Lo Pan is dead, he kinda loses it? As in, he expands like a balloon and- blows up?

I know. There's only ten minutes left, thank goodness. So now they just have to get past Lightning, and- well- Egg drops a statue on his head, so that's that. And Jack finds his truck! Miao Yin is rescued! It's all good. They celebrate later at the restaurant and Margo invites Eddie over- so that's happening. Egg slips out but Jack asks him if he'll go back to China, and Egg replies,

Aw. So are Jack and Gracie a thing? Well... no, actually. Jack would rather keep truck driving. Although he says he'll "think about it." Wow, I imagine Gracie will have sleepless nights waiting for him to come back. Anyway, and oh- the freakish monster thing that grabbed Gracie back in Lo Pan's place? It stowed away on Jack's truck! Surprise! The next rest stop should be interesting.

Okay so I've seen this now. Sorry to say. Apparently it was meant to be funny, but I don't know... it's just bad. Like not even in a "so bad it's good" kinda way, although apparently some disagree? It is a cult classic now, after all, supposedly. I'm not feeling it though.
Posted by Greg at 6:13 PM