Gone Without A Trace 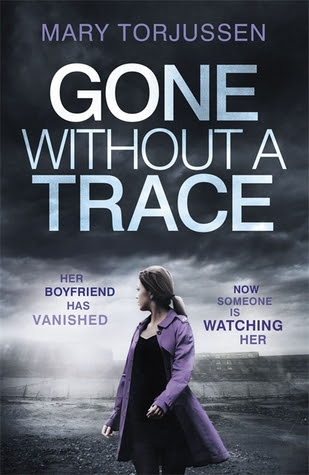 Gone Without A Trace is a psychological thriller with a unique premise- a woman comes home from work to find her boyfriend gone. Not just gone- he has literally erased all evidence of his existence, including pictures on her cellphone, all his belongings, the whole works. And Hannah has no idea why- she thought they were happy, there were no warning signs. Hannah is desperate to find him- she wants to know why- and things take off from there when she starts getting strange phone calls and even more alarming- someone is entering her home when she's gone, taking little things or leaving something. She's convinced it's her missing boyfriend since the items in question are related to him.

I thought this was a pretty good story, a little unrealistic perhaps, but not jarringly bad, and it was fun trying to figure out Hannah and what was going on. There are little clues sprinkled throughout the story that everything is not right with Hannah's family life, and that there may have been some problems growing up, as she's not close with her parents but we don't find out why initially. And her relationship with her best friend Katie is problematic to say the least- they seem to be tight but at the same time Katie seems jealous or vindictive or something. It's a fascinating but toxic relationship.

The POV is all from Hannah and like I said there are little clues but I felt like not a lot happened for the first two- thirds of the story. In fairness there are the phone calls where someone calls her but doesn't speak- creepy enough- but the feeling that someone has been in her home is even worse. And she gets texts with cryptic and scary messages. So the tension is slowly ratcheted up that way, but I just didn't feel like enough was happening. I also found Hannah somewhat unlikable at times, she seemed to snap at her friends and be very short, and I could kind of understand given what she's going through but at the same time it seemed a bit much. Although Katie is a toxic friend to be sure.

I feel like some people may figure out the twist and others, like me, will have a theory and be wrong. I had some ideas where this was going but was surprised that there were several twists and that complicated things. I did feel the author sprinkled enough clues in that by the time the twist occurred I could almost see it coming- it was the twist or two after that which surprised me. So it kept me turning pages, but again this is not the fastest paced book.  It's worth sticking it out though as I thought the ending was absolutely killer. And somewhat chilling.

So on balance I think this was a good read. It asks a lot of questions about relationships and family secrets. And it gets you thinking about how well do you really know someone? Hannah never saw it coming with her boyfriend and when she digs deeper she finds all kinds of things out, and it was interesting to see how she reacted and how it affected the supporting cast around her. I think this is a pretty good read, and while it may have a few pacing issues, the payoff is good, so if you're interested it's worth a shot.