Girl Out Of Water 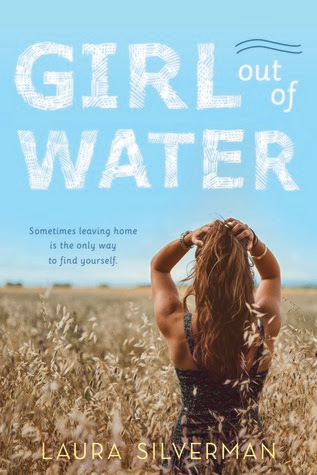 Imagine you're a junior in high school and you live in Santa Cruz, steps away from the beach. You and your friends surf all day and life is good. Some of your friends are going away to college or the service soon, so this is your last summer with some of them. And Surf Break, the big surfing festival, is coming up later in the summer. Oh, and your best friend who you have the hots for just kissed you. Good times? Well then you get home and your dad tells you guess what- you're going to Nebraska for the summer. Needless to say, Anise Sawyer is not pleased.

I love the premise- surfer girl goes to the heartland to care for her grandmother (who was in an accident) and her cousins, and falls in love with a guy while she's there- can you see the drama potential? But it's actually a heartfelt story and done well, in lots of ways. Anise is a good kid, yeah she drinks on the beach and hits a joint now and then, but her and her dad (a single father) have a super tight relationship, and she basically makes good choices. And part of her doesn't mind going to help her grandmother- she loves her family and seems pretty well grounded for her age.  I liked Anise a lot- in fact I liked everyone a lot. The supporting cast, her family, everyone is fine. And it's a good story. It just fell a little flat for me and took me a while to finish it.

I just wasn't super motivated to read it at times. I liked the beginning and the end, it just seemed like not a lot happened in the middle. She learns to skateboard and falls for Lincoln and has some family issues. There's a subplot with her cousin Emery that had potential- Emery gets moody and quiet and Anise suspects something happened with her friends, but the reveal was pretty anti- climactic. And Lincoln is a good guy, at times almost too good. And while I mentioned above that Anise falls in love with him, I should correct that- I'm not sure they ever use the word love. It's kind of refreshing that even as they're really into each other, they're not all like soul mates forever. They both realize what they have now is important, but there's no lifelong promises.

A couple other things are going on. Anise struggles with her feelings for her mother, who shows up occasionally but for the most part is a drifter. Anise and her dad have adjusted to this but there's the real possibility that her mother may show up at some point. That's something that Anise struggles with throughout the story. Also, as she settles into life in Nebraska, she kind of loses touch with her friends. Especially when Lincoln comes into the picture. As the summer wears on she loses touch with Santa Cruz, and by the end of the book has to come to grips with that.

It seemed a bit much that Anise had to leave almost immediately for Nebraska, and had to spend the whole summer. And until Lincoln comes along all Anise wants is to go home, and I couldn't blame her. I got bored reading about her cousins and skateboarding. Lincoln I didn't really connect with because he seemed too perfect- can we have at least one flaw?- and I frankly wanted her to go home to Eric, the guy she kissed before leaving (and her best friend of seventeen years). But the author may have intended for the reader to have mixed feelings even as Anise does, so instead of a problem that may have been the point. Anise is also a pretty good role model for teens, other than the occasional f- bombs (actually she uses those quite a bit) she makes good choices about sex and relationships.

So as you can see I did have a hard time with this. I liked the beginning and end and the resolution of the Eric/ Lincoln conundrum seemed realistic. A little bittersweet but how could it not be? It also asks a lot of questions about life and what Anise wants to do with hers- I liked that aspect and I think it was handled well. This is a solid read that kind of drags in the middle but if the premise appeals to you it has a lot to offer.
Posted by Greg at 12:00 AM