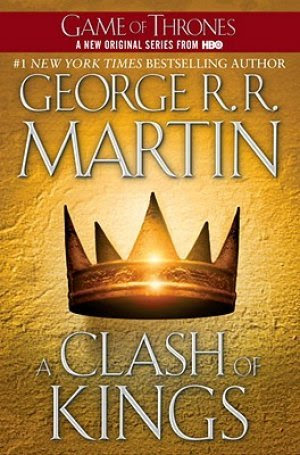 Catelyn Stark is a controversial figure in Game of Thrones fandom. Some hate her for the way she treated Jon Snow, among other reasons, while others cut her a little more slack. I always tended to kind of like her in the books- even though she is a problematic figure for many reasons- whereas on the show I did not like her portrayal at all. And as I was mulling the return of Game of Thrones and its seventh season, I thought it would be fun to take a look at Catelyn- books vs. show.

First of all this post will have spoilers. Catelyn is the wife of Ned Stark, the Warden of the North at the beginning of the series, and she comes from House Tully, one of the great Houses that rule Westeros. She seems to be a good mother for the most part, although we get hints that she might be a little less patient with Arya than with Sansa, who is more of a "proper" lady. And of course she treats Jon Snow very badly, which is what sets many fans against her. Jon of course is Ned's bastard child, raised alongside his legitimate children, and his daily presence at Winterfell is hard for Catelyn to accept. Of course Jon may not really be Ned's bastard- the most prominent theory out there is that Jon is the child of Lyanna Stark, the sister of Ned, and that he raised Jon as his own to protect him.

It was the one thing she could never forgive him. She had come to love her husband with all her heart, but she never found it in her to love Jon. She might have overlooked a dozen bastards for Ned's sake, so long as they were out of sight. Jon was never out of sight, and as he grew, he looked more like Ned than any of the true born sons she bore him. Somehow that made it wrong.

Ned would not speak of the mother, not so much as a word, but a castle has no secrets, and Catelyn heard her maids repeating tales they heard from the lips of her husband's soldiers. They whispered of Ser Arthur Dayne, the Sword of the Morning, deadliest of the seven knights of Aerys'  Kingsguard, and of how their young lord had slain him in single combat.

And they told how afterward Ned had carried Ser Arthur's sword back to the beautiful young sister who awaited him in a castle called Starfall o the shores of the Summer Sea.

It had taken her a fortnight to marshal her courage, but finally, in bed one night, Catelyn had asked her husband the truth of it, asked him to his face.

That was the only time in all their years that Ned had ever frightened her. "Never ask me about Jon," he said, cold as ice. "He is my blood, and that is all you need to know. And now I will learn where you heard that name, my lady." She had pledged to obey; she told him; and from that day on, the whispering had stopped, and Ashara Dayne's name was never heard in Winterfell again.

Who is Ashara Dayne, and why was there whispering? Well Ashara is the sister of Ser Arthur Dayne, and there were rumors that Ned fell in love with Ashara at a tourney, so maybe some assumed Jon was a bastard that Ned had with her?

The other thing to keep in mind here is that Ned and Catelyn were newly married at this point. When he came home from the war with a bastard in tow she hardly knew him- they had been married just before he went off to fight. So not only did she have to get to know her husband, but he came home with a bastard! Or so she thought, understandably. Given all this, I think it's pretty understandable that she feels the way she does.

Later Catelyn and Robb are talking over the succession if anything should happen to Robb, and he informs her he wants to make Jon his heir. She's shocked, and shares her concerns with him.

Catelyn knew how stubborn her son could be. "A bastard cannot inherit."
"Not unless he's legitimized by a royal decree," said Robb. "There is more precedent for that than for releasing a Sworn Brother from his oath."
"Precedent," she said bitterly. "Yes, Aegon the Fourth legitimized all his bastards on his deathbed. And how much pain, grief, war, and murder grew from that? I know you trust Jon. But can you trust his sons? Or their sons? The Blackfyre pretenders troubled the Targaryens for five generations, until Barristan the Bold slew the last of them on the Stepstones. If you make Jon legitimate, there is no way to turn him bastard again. Should he wed and breed, any sons you may have by Jeyne will never be safe."

Catelyn is thus eminently practical- and looking out for Robb first.

So let's move on from the Jon question. What else does Catelyn have going for or against her? Well I think she gave Robb good advice, both the counsel she gave him about Jon (it makes sense from her perspective), and also her general advice to Robb- who to trust, who not to trust, etc. You can't really fault her advice to Robb during the war, in my view. However she makes a huge mistake that arguably starts the whole war to begin with. Coming across Tyrion at an inn, and remembering the lies that Littlefinger told her, she arrests Tyrion, which infuriates the Lannisters and starts the fighting. Now granted it was probably just a matter of time before Starks and Lannisters came to blows, but this was not well thought out and has such terrible repercussions that it's not an exaggeration to say that she kind of started the war.

In her defense she is relying on advice given to her by Littlefinger, who she's known since childhood, and she's been sent home by Ned to prepare for war, just in case, so it's not much of a stretch for her to make that call when she encounters Tyrion. Littlefinger told her he was behind the assassination try on her son Bran. So what would she do? Not to mention her own sister had sent her a letter implicating the Lannisters in the murder of Jon Arryn. So she is being manipulated, no question.

Lastly I want to look at one of my favorite chapters in the series, the one where she meets with Renly to treat with him on behalf of Robb, who is claiming kingship of the North at this point. She is seeking an alliance with Renly's forces. There is so much good stuff in this chapter, I'll just share a few quotes. I especially like it when she puts Lord Randyll Tarly in his place!

"No disrepect to you, Lady Stark, but it would have been more seemly had Lord Robb come to pay homage to the king himself, rather than hiding behind his mother's skirts."

"King Robb is warring, my lord," Catelyn replied with icy courtesy, "not playing at tourney."

And when she muses that all the nobility, all the knights, in Renly's camp have no idea what's coming, Lord Rowan asks her what she means.

Because it will not last," Catelyn answered, sadly. "Because they are the knights of summer, and winter is coming."
Posted by Greg at 12:00 AM