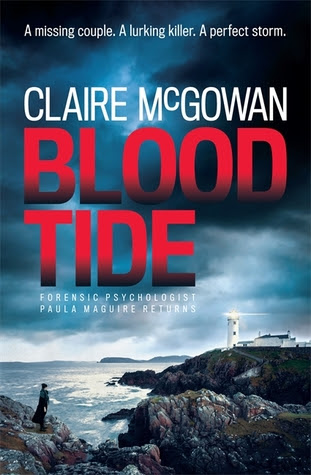 Blood Tide was a very atmospheric read. Paula Maguire is a forensic psychologist who is called in to investigate a missing persons case on an isolated island. A couple that have recently moved to the island have gone missing, and everyone on the island thinks they were lost at sea. Paula is not so sure however, after finding clues that indicate something else might be going on. The island has had a rash of recent violence and outsiders are not welcome there, and Paula gets little cooperation from the locals, including the local police guy.

This book was a mixed bag for me. I liked it on balance, and it's got a great premise- missing persons, an island, a raging storm. And speaking of the storm, the author did a fantastic job evoking the nastiness of the weather. Bone Island, as it's called, is a speck of rock in the Atlantic just off the coast of Ireland, and to say it's inhospitable would be an understatement. Life is tough there and there's nothing better than a twisty, intense murder mystery on a storm- wracked island! So that part of the story worked for me. I really felt like I was there with the roiling seas, the howling wind and the pebble lined shore.

The problem is partly my own fault. This is the fifth book of a series, and in addition to the island mystery there is a subplot revolving around Paula's quest to find her mother, missing for twenty years. Most assume she's dead, but Paula holds out hope. The story of Paula and her mother are tied up in the violence that wracked northern Ireland for decades, with IRA and loyalist forces playing key roles. To be honest this subplot was less interesting to me, and I felt lost in the details of it, but that's again because I came into this mid- series. If I had read the previous books I'm sure it all would have made sense.

Paula has other personal issues going on as well, including her relationship with her young daughter and the man she was going to marry being arrested (this is related to the aforementioned subplot). And to top it off, her sometime partner and former boss Guy is the actual father of her daughter. So her life is complicated. Again, if you are a regular of the series this is probably a satisfying installment that moves the backstory along, but for me coming in as a one-off I was mostly clueless. I did enjoy the island mystery however.

Guy shows up in the story to help her out on the island, and I liked their dynamic. They work well together and it was pretty clear to me they have feelings for each other, although Guy is himself married. Like I said, Paula's life is complex! They're strictly professional though so there's no fooling around going on, but they make a good team and it's a good thing too, because when the storm hits and things go down on the island, they need each other. They find themselves stranded and unwelcome and things get a little tense on the island.

The atmosphere was huge for me, as I mentioned, and I thought the island was brought to life well. The way of life on the island is slowly dying and the only thing keeping people there is a company that harvests minerals from seaweed. One of the missing persons worked for the company but his behavior got strange before he went missing, and Paula soon has to wonder if the company is hiding something. And to top it off we also get the perspective of one of the missing persons, and her POV sheds light on what really happened, so we get little hints even as the investigation goes on.

I would recommend this for anyone who likes a twisty mystery set in an isolated locale or anyone who likes a crime thriller set in Ireland. It was a fast read and while there are a few moments where I thought things moved almost too fast, there are some suspenseful bits and overall I enjoyed this one. I'm not sure if I will read further although I'm glad I picked this one up- the premise just appealed to me and I saw it on a blog somewhere- but it was fun and had some chilling moments right up to the end.
Posted by Greg at 12:00 AM