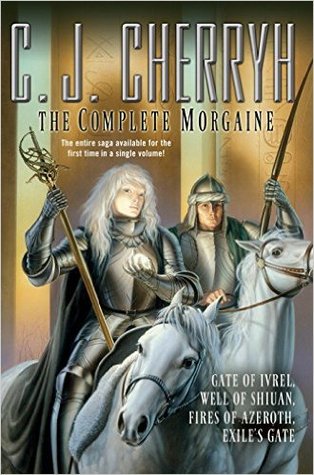 There are some books I've always wanted to read but just never have. The Morgaine books by C.J. Cherryh are among those. The plot is one that has always appealed - a woman who must travel from world to world, closing the Gates that are disrupting time and space- that pretty much had me right there. For some reason however I never got around to these. I've owned various copies over the years, from used bookstores, and lost them in moves or whatever- but with Vintage SciFi Month here they came to mind again. And - the books have just been released in a new omnibus edition, The Complete Morgaine. Naturally I snatched it up, and dove in- and am I glad I did.

The Morgaine series consists of four books- Gate of Ivrel, Well of Shiuan, Fires of Azeroth and Exile's Gate. They are the story of Morgaine, a woman who is the last surviving member of an expedition sent to close the Gates. The Gates have been around for millenia and were the cornerstone of a great empire that spanned the stars- but when someone went back in time and changed... something... all of reality began to unravel. It was expected that this expedition would never return, and that it might even span generations to accomplish its task.

This is not only Morgaine's story, however. The first book introduces us to Vanye, a man who is exiled for kinslaying. He wanders alone until he chances upon Morgaine coming through a Gate- it has been a hundred years since anyone has seen her, although for her it has only been months. She claims Vanye as an ilin, someone who will owe her a years service - as an exile he must honor that claiming. And so begins a fascinating relationship that explores the bounds of honor, duty and sacrifice.

Vanye fears Morgaine at first, and obeys her because honor demands he must- and she sees him as a tool only, someone who can help her navigate his world as she seeks to close a Gate. Over time they begin to have regard for each other, and their bond becomes something more than just duty and honor. Always though the objective remains- the Gates must be closed. To do so Morgaine will sacrifice anything- herself, Vanye, anyone. There are so many times I wanted to get inside Morgaine's head, to get answers- but the story is told from Vanye's perspective, and there is more mystery to it that way. I loved seeing how their relationship developed- from strangers to friends to an unshakable bond that transcends worlds. And the ending of the first book is one of the more enjoyable and thought provoking endings I've read in some time.

There are so many beautiful moments in these books. In book two they are on a world of riven moons, a world where floodwaters are rising, and they look up and see the moon fragments bathed in moondust. The books explore honor and duty and Vanye is compelled to keep his oath to Morgaine, even if it means dooming an entire world. How far must one go to honor an oath, measured against human lives? And when the villain they pursue appeals to Vanye to save these people, what choice can be made?

I think the third book- Fires of Azeroth- is my favorite of the bunch. I found that world the most interesting and also enjoyed how the villain's motivations were called into question, and the surprising twist to his story. The book ended well also, and I can see why the author considered the story told at that point. In many ways I would have been satisfied to leave it there, but the fourth book picks up right after the third one although it was written years later, and to some extent I found it unnecessary.

If there is a weakness to the books it is the same thing as the books' strength- the interaction between Morgaine and Vanye. This is a story of their relationship and how it grows as much as it is about Gates and adventure. I enjoyed the nuances and growth, of getting to know them as people, but if you're more interested in straight up action then the personality stuff might get tedious by the fourth book. I would have been happy to leave their story as complete after the third book, it just has closure- but I'm glad I read these and highly recommend them if you enjoy a mix of science fiction and fantasy with well rounded characters.

I know not everyone likes long reviews but I did want to share more thoughts on this series, so if you're not interested feel free to skip this part. I won't mind. I just had some additional thoughts on the characters and wanted to get my thoughts down. Feel free to comment and discuss, whether you're read these or not. Do you like complex character development as a focus of a fantasy story or are you more interested in plot?

One of the compelling things about these books is the villain Roh a being who enhances his lifespan by taking others' bodies. As ruthless a villain as he is, he often is the means by which Vanye survives, and they have a curious relationship as well. Roh was his kinsman- the man who took his cousins body is his cousin, to a certain extent- their personalities merge over time- and while Vanye is honor bound to kill Roh at Morgaine's command, he also finds himself allied with Roh at times due to events.

How far should one go to honor an oath? Would you let others die if it was necessary to fulfill that oath? Vanye's society holds oaths as sacred, and he really struggles with balancing that against the needs of those who are caught up in Morgaine's wake. Everywhere she goes death and destruction seem to follow, not because she is evil but because she is focused on her task- closing the Gates- and nothing else matters. To not do so, to fail, means all of reality could collapse- so she does not have the luxury of choosing this or that. She does what she must. And Vanye must follow her on faith.

Morgaine and I have done this thing, he could not forbear thinking. My doing as much as hers. Heaven forgive us."
Posted by Greg at 2:00 AM