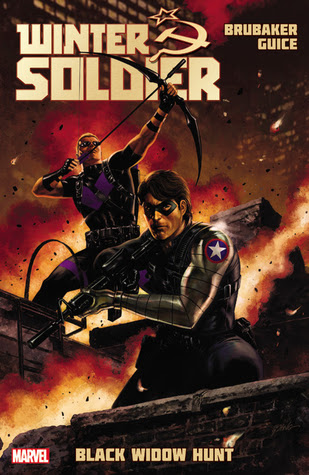 Winter Soldier: Black Widow Hunt is the third Winter Soldier story I've reviewed on the blog. I'm enjoying these modern forays into the Marvel universe as I normally review older, "classic" stories. After seeing the Captain America: Winter Soldier movie I thought it would be fun to see what the character has been up to in the comics. This story picks up where the previous one, Broken Arrow, left off (my review here). Leo Novokov, a Soviet sleeper agent trained by Winter Soldier himself, has awakened from stasis and has a grudge against Bucky. He managed to capture and brainwash the Black Widow into thinking she is still a Russian agent- and Bucky is desperately trying to find her, with little luck.

This volume is a little more fun because there are guest stars all over the place. Captain America, Hawkeye and Wolverine all play major roles in the story. The narration occasionally shifts so we get the perspectives of Cap and Wolverine as we go. Bucky becomes increasingly more desperate as the search continues and the stakes get higher- Novokov wants to hurt Bucky and win Natasha's love in his own twisted way, and it seems like the heroes are always a step behind.  When Bucky finally closes in he has to make a choice- allow himself to be implanted with a mission of Novokov's, or risk losing Natasha forever. He takes the implant, which returns him to his Winter Soldier days- now the heroes have to face Winter Soldier again, along with finding Novokov. This was fun as we get to see Buckly in badass Winter Soldier mode again- and Cap, Hawkeye and Wolverine have to see if they can stop him when he's not holding back. Fans of Winter soldier in the movie may enjoy this- I did.

I liked Wolverine's internal monologue when he realizes Winter Soldier in full assassin mode is a tough fight, and Hawkeye's surprise when he tries to get the drop on Winter Soldier and fails. It's fun too when Cap, the big kahuna, shows up. The ending though I have mixed feelings about. The showdown with a brainwashed Black Widow is good- it's nice to see her kick some butt too.

The biggest problem for me with the story is the art. It's not very good. It's murky and the story and action are hard to follow at times due to that. This would have been a better story with better art, but it has its moments. I don't know where Winter Soldier goes from here, but this is a bitter ending to his time with Black Widow. Looks like Winter Soldier is on his own again.