Review: A Dance With Dragons 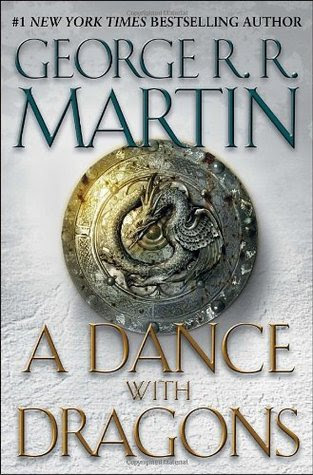 This is a blogoversary post. The original review was posted on August 31, 2013.


A Dance with Dragons is the fifth book in the A Song of Ice and Fire series by George RR Martin, and to say it was long awaited would be an understatement. Released in 2011, this book resumes the storylines of characters left idle since A Storm of Swords in 2000- namely Jon Snow, Daenerys Targaryen and Tyrion Lannister. They are the big three in terms of POV chapters, and between them they are the bulk of the book. So we’re talking over 10 years of waiting to resume these storylines! Was the wait worth it? In a word- yes.

Please note this review WILL contain spoilers for the book, so if you don’t want to be spoiled please stop reading. You can check out my non- spoilery review here.

The storylines of the main characters were fun to read, although in some cases a little unsatisfying. Tyrion travels half the world to meet Daenerys, and is very close at the end, but after a thousand pages it was a little frustrating that he’s just getting there. Martin seems to be showing us as much of his world as he can, and while it’s enthralling and fun it is also slowing the plot waaay down. I thought it a little implausible that he just happens to run into Jorah Mormont- I mean what are the odds? Tyrion as always is great, and has some great lines, but his arc is indicative of the whole book- the storyline is still expanding, not winding down.

I enjoyed Jon’s storyline although I thought he made some bad decisions. Jon has to balance the needs of the Nights Watch against the demands Stannis is placing upon him. He could have explained himself a lot better to his men, for one thing. The things he does, while perhaps necessary, are so counter to the Nights Watch that he was bound to make enemies. He should have known that and taken precautions. Melisandre warns him numerous times. Still the ending was shocking! It’s a good thing Melisandre is at the Wall- I think he’s going to need her help at this point.

A lot happens in Jon’s chapters, but at the same time he’s still at the Wall and I can’t help but think how in the first three books he came to the Watch, went beyond the Wall, rode with the wildlings, came back and became Lord Commander. Again, a sense that the plot has slowed down.

Daenerys is even more frustrating for me than Jon. I’ve never been a huge fan of Dany, mainly because I just don’t like her decisions. Settling in Meereen was baffling to me, and she’s still in the vicinity at the end of book five. I know she wants to learn to be a good ruler, but in my view she should have went to Westeros a long time ago. Or at the very least by now she should be making preparations for Westeros, but she’s still bogged down in the east. That may change soon, however.

Dany’s story seems to be at a critical point, the battle for Meereen is looming and the dragons are making their presence known. If Martin resolves this early in the next book and she sets out for Westeros, that could jumpstart this series. Still, again I couldn’t help thinking that after a thousand pages we’re still not done with Meereen.

Having said all that, I got more mileage out of the secondary characters. Davos’ storyline takes him in an unexpected direction. Davos has always been a favorite of mine- he’s been raised to lordship but he is a common man by birth, with a common sense perspective. I loved the chapter where he meets with Manderly. Yeah- that’s all I can say about that. The north remembers.

We revisit Jaime briefly, we get to see Arya in Braavos and Bran finds the three eyed crow. We get a glimpse of Melisandre through a chapter of her own, which shows her to be utterly committed to her cause but raises as many questions as it answers. The most interesting storyline for me in this book may have been the Jon Connington chapters. I thought Connington’s perspective was fascinating.

Is Young Griff really Aegon Targaryen, thought dead all these years? I didn’t see this coming. And I really enjoyed seeing the Golden Company. They launch a lightning attack on Westeros while Daenerys struggles in Meereen. It feels like a game changer. And one cannot help but think how words have consequences. After all Tyrion broaches the idea of Aegon sailing west, rather than east, and that’s exactly what he does after binding the Golden Company to his cause. I can’t wait to see Dany’s reaction when she finds out her brother’s son is alive and invading Westeros to claim the throne!

The last third of the book is where things start happening at a breakneck pace- each chapter has a cliffhanger. These are probably the biggest cliffhangers of the whole series, and the most frustrating. I mean, we have two pivotal battles that are imminent, a HUGE development at the Wall- and we have to wait. The epilogue is a reminder that anything can happen in this series and the next book should start off with a bang- except that it’s probably a ways off yet. That’s what is truly frustrating. In an interview Martin’s editor noted that some material was held back for the next book. With the wait between books being what it is, I really feel Martin or his editor should have given us resolution of at least one of these cliffhangers.

Nevertheless this is such an absorbing, fun, immersive book that I highly recommend it. It’s a breath of fresh air after the disappointing A Feast for Crows. The first Tyrion chapter has him sailing across the narrow sea, picking up his storyline from  eleven years ago, which just felt weird! We then revisit Daenerys and Jon and from there the book just picks up steam. There are shocks and surprises galore, revelations and secrets- it’s not always a series for the faint of heart, but the rewards are tremendous for those who have been anxiously waiting for more from these characters.

Bottom line- this is a fantastic book, with a ton of subplots and details and secrets. It’s fun if you like this world at all, and I could keep reading these storylines forever. In terms of the overall plot though, it has slowed down so much that it’s hard to see the Winds of Winter being much different- we’ll get more forward movement but if the pace continues at this rate, can Martin finish in two books? Only time will tell.