Review: Emilie and the Sky World 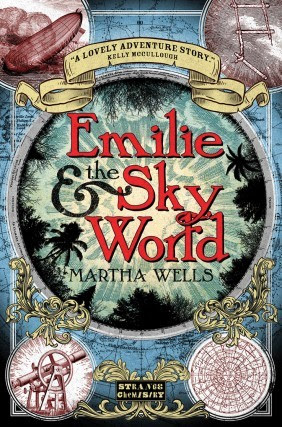 Emilie and the Sky World by Martha Wells is the sequel to Emilie and the Hollow World, a book which I read and enjoyed last year. That one told the story of Emilie, a runaway who left home to stay with her cousin but got swept into an otherwordly adventure. This book picks up right where that one left off. Emilie is back in town with her new love interest Daniel but it's not long before they get pulled into another adventure.

Emilie ran away from her domineering uncle Yeric in the last book, and here he shows up looking for her, along with her brother Efrain. The reunion is not a pleasant one, but when the Marlende's are made aware of an atmospheric disturbance, they mount an emergency expedition to investigate. Emilie once again accompanies them- and so does her brother, who stows away onboard their airship. Now Emilie must deal not only with the dangers of the sky world, but with her brother as well. The expedition soon find that the cause of the disturbance is another airship - an immense one and of strange design. It's obviously from another world- but is it friend or foe? Before long the members of the expedition are separated and hurled into another world- a world unlike anything they have encountered before.


This story started off good- I liked the beginning and Emilie's newfound confidence was nice. I got a little bored though through the first third of the book- maybe the Hollow World with its merpeople and deserted islands was more appealing to me- but I had a hard time getting into the story for a while. The action picks up though and Emilie soon asserted herself as the resourceful heroine I remembered from the first book. The cast of the first book are all here but the story really missed Rani and Kenar, the nonhuman supporting characters from the first book.

Once the action picks up it's a pretty breakneck pace for the last third of the book, as the expedition careens from one crisis to the next- just like in the first. There seems to be a formula being set down here- a set up, then an obligatory nonhuman companion appears, then all out action. It's not a bad formula- it's actually fun even if not a lot of thinking is required. I liked the ending too and I would enjoy reading more of her adventures. I didn't like this one as much as the first one, but I will follow the series if it continues. My recommendation is to read the first one, and if you like then continue the ride with this one.
Posted by Greg at 4:57 AM