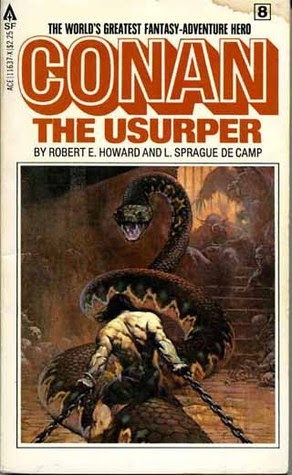 The Treasure of Tranicos is a short story by Robert E. Howard starring his most famous creation, Conan the Cimmerian. This story has been published in various forms over the years- I'm reviewing the version found in Conan the Usurper. This is a rollicking, fast paced story of pirates, hidden treasure and sorcery. The story starts off with Conan on the run, being hunted through the wilderness by relentless Picts. They have been hunting him for over a hundred miles, and even his wolfish vitality cannot last forever. He is amazed when he smells the salt tang in the air, he had not realized he was so close to the sea- but the end is near and he is looking for a place to make a final stand. He finds more than he bargained for, however. A cave full of treasure and the remains of a notorious pirate captain- a cave the Picts won't go near. What dark secret lurks within the cave?
We then switch scenes to the coast not far away, and meet Belesa and Tina. Belesa is the niece of Count Valenso Korzetta, who has fled his native Zingara for reasons unknown to start a new life on this barren coast. Tina is her handmaid. Together they while away the days in exile- but everything changes in an instant when they spy sails coming around the headland. Strom the pirate comes calling and demands that Valenso turn over loot that he assumes Valenso has found. Valenso denies this, and when talks break down Strom promptly lays siege to the palisade, only to flee when another ship sails into the bay hoisting the colors of Zingara. This turns out to be no rescue however, rather the Zingaran buccaneer Zarono who has his own reasons for sailing into the bay. He might be even more dastardly than Strom.
It turns out Strom and Zarono have been hunting a treasure map for years. Each thought the other had it and they were watching each other. When Strom came north, figuring Valenso had acquired the map, Zarono followed. Valenso, however, has an entirely different, and more sinister, reason for uprooting his household and fleeing to this desolate coast.

After a freak storm dashes Zarono’s ship to bits, the buccaneer is stranded along with Valenso and his people. Strom then reappears and demands a parley. Strom thinks Zarono has the map and wants to form an alliance- he has the ship that can sail them away, Zarono has the map and Valenso has a base of operations. Except that Zarono doesn’t have the map. Conan does… and when he arrives at the parley everything changes.
"Zarono did not reply, his mind wholly absorbed in the problem of getting possession of Strom's ship; of continuing the parley without betraying the fact that he did not have the map. He wondered who in Mitra's name did have the map."
The parley is my favorite part of the story, and just a wonderful piece of writing. None of the men present trusts the others a whit, and there is back and forth between bluff Strom, devious Zarono, desperate Valenso and Conan- who has the trump card (the treasure). Can they work together long enough to secure the treasure and sail away before the Picts come down on them? Or will Valenso's dark secret doom them all?

"I have had one glimpse of that map. Strom and Zingelito were with me, and a Nemedian who sailed with the Barachans. We looked upon it in a hovel in a certain Zingaran sea-port town, where we were skulking in disguise. Somebody knocked over the lamp, and somebody howled in the dark, and when we got the light on again, the old miser who owned the map was dead with a dirk in his heart, and the map was gone, and the night-watch was clattering down the street with their pikes to investigate the clamor. We scattered, and each went his own way."
This is a great treasure hunt/ adventure story as well as a classic sword and sorcery tale. It's a fantastic pirate story as well. The story is not without its flaws- although Belesa does threaten to knife Valenso at one point, her and Tina are mostly here to be rescued. It has a lot of atmosphere though and is a great way to spend an hour if you want a good escapist read. I actually liked Conan much better in the original stories than the movie version and this is probably my favorite of the Conan tales.This story was written in the 1930's but was rewritten by L. Sprague de Camp as The Treasure of Tranicos. The unedited, and therefore definitive, version of the story can be found here.
Posted by Greg at 6:25 PM